Back home when I was fishing for a living, the Labor Day and July 4th weekends were welcomed with the enthusiasm one reserves for persistent hemorrhoids or one's mother-in-law coming for a 16-week visit. Amateur Hour on the water.

This should be a good time for me to point out that while I am one of those 'get off my lawn' people when it comes to government regulation, I am an enthusiastic supporter of requiring all boaters to undergo training and licensing if they carry even one guest aboard, or are in command of any vessel larger than they are.  Labor Day and Independence Day are always opened and closed by fishing dead bodies of idiots, the negligent, drunks and their victims out of the harbors and bodies of water of the United States.


And so it is with us.  24 hours ago, literally, I had handed off the anchor watch to my partner and was enthusiastically looking forward to a sandwich and a nap. We were moored alongside a vessel, secure at a mooring buoy with plenty of sea room...and then a saiboater sailed directly under our bow and got his lovely two-masted boat wedged firmly under our bow rake, there to begin the process of being battered to pieces and sunk.

Quick as you please, we were on the bow (note to self: I have GOT to start exercising again), and looking down at some very panicked people. The owner of said boat refused to hand out life jackets to his passengers, despite our pleas to do so, and, with the boat in danger of rolling under us, we made the command decision to lower a ladder to them get them jacketed and get them up. The passengers shot up on our deck like watermelon seeds through squeezed fingertips... the owner, hell, I think he wanted to Go Down With The Ship. It took 8 guys to beg him to come aboard.

At any rate, the sailboat didn't go down- it got battered, hard, and the sailing gear got ruined, but we got the people up, and phone calls made.

Long story short, someone who doesn't know enough not to sail to windward of a Big Iron boat in high current shouldn't have passengers as he does the equivalent of running with scissors.


The Coast Guard responded by owlishly looking at us and doing Fuck All, deciding to risk the boat sinking while a commercial tow company thought about whether or not they'd come and get the little boat. They also very nearly got swept under our bows, too, passing within about 5 feet of disaster due to idiotic boat handling. The New York Police Department, on the other hand, responded rapidly and safely, with a professionalism, courtesy and some excellent boat handling, and good people-handling, too, as they organized a ride ashore for the passengers and owner. I am so thoroughly impressed by their response and level of care taken in managing the scene. The Coast Guard was a big orange disappointment, but Jesus, what can you expect from a bunch of 22 year olds from the square states?
Anyhow, I'm just happy no one was hurt. The boat owner was a bit of a dick, but I'll write that off to shock, embarrassment, and (I hope) shame.  He was so pleasant to the tow company that they in the end refused to come get his boat, and the Coast Guard fished it out of our bows at slack water, looking somewhat peaky, but still upright. 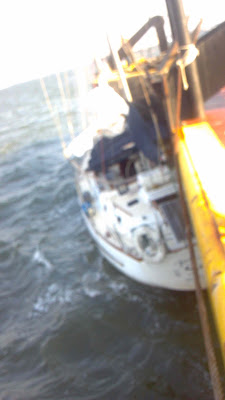 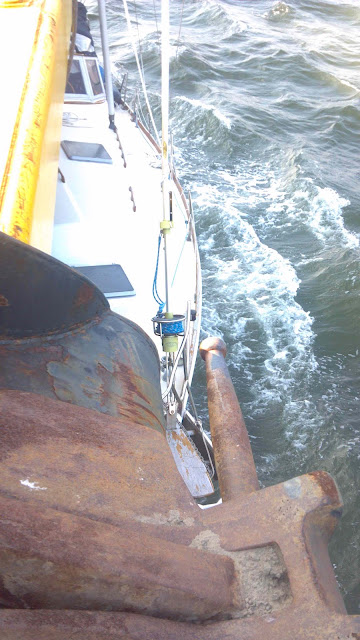 I'm going to revisit this as a strong argument for mandatory licensing... but not today. Some of us still gots to move the oil.

WOW..talk about some excitement and the guy was a dick.. you should have keelhauled him! ha!

That one [the owner] slipped thru the gene pool.
It's amazing what the boating will do,somehow survive and not relize WTF could have happened.