Cleaning up the woodpile

I spent a lot of the week just cleaning out and organizing our home. Inappropriately Hot Foreign Wife had a list of heavy things that needed moving, and of course there's almost always a set of stairs involved, because of course there is.

With the price of wood coming down to somewhat less insane levels, I dug into my cut-offs woodpile and made a seed starting bench for my wife's houseplants. I've been getting the side-eye from the War Department about the growing assortment of boards and bits that are too big to throw away but too small to ordinarily find a use for. 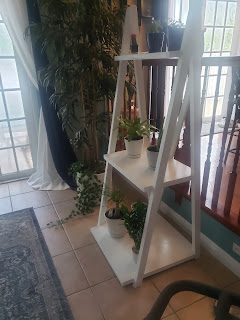 In addition I took a glued up walnut and maple board that I had started laying into a few months ago when my bandsaw went all cattywampus and ruined the cut. With my shiny new bandsaw I finished the cut, but the ragged ends from the first sawing were too messed up to work with, so instead of trying to fit compound curves, I made up a thick paste of food-safe epoxy and coffee grounds, and troweled that into the gaps. The resulting black curves look less bad than they once did, after shaping the board,  bringing it down to 1000-grit finish and dunking it in mineral oil. Anyways, it was a bit of a rescue but making a cutting board out of a sow's ear is better than throwing it all in the trash I guess. 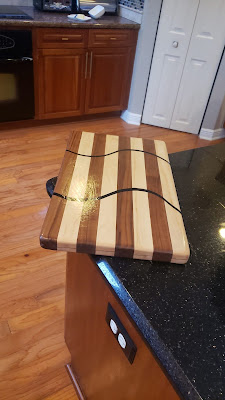 Reporting from on scene at my house

I'm home, and I've been home for a week now. I don't think I've been more than 2 miles from my house since I arrived here. All is well. I've been productive in my shop, my little projects are going well and there's a bottle of champagne cooling for a night swim with the Mrs. tonight.

Well, under a week to go on this hitch, and that's nice.

We've been pretty steady work-wise, with cargoes every day, or at least movements every day. There were times when we'd have 18 hours off, which was nice, although this time the off time rarely coincided with my watch. Right now is in fact the first watch off I've had in the past week.

I made the most of it, though. We took on stores, and I overheated badly towards the end. It's 98 and sunny without any wind today, and so the steel deck was radiating heat as well. Still, stores and spares are on board, and I'm inside the house with the AC blasting and B is catching a nap, so I have privacy too.

I have some repairs to make at home, and a little furniture building project, and I got a sheet of 1/8" plywood that arrived at my house the other day, so if we get a rainy day I might try to cobble together a little model boat for my new office at home. I was thinking I'd make a Swampscott dory, one of my favorite designs, and something I've never made in model or full size. 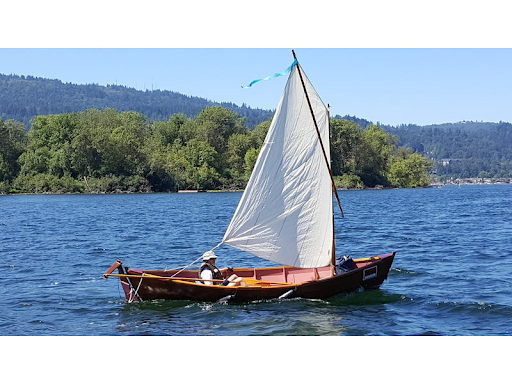 It's a pleasant thought, but between indoor and outdoor projects at home, I don't know if I'll have time.

In the meanwhile, I'm done with my projects on board for this tour, anyhow. We're into the Dog Days now and I'm old and senior enough that I feel no particular guilt in not working until I vomit for something I don't get paid for anyways. I'll try not to break anything, in the meanwhile. There's lots of things here I can accidentally turn in to a smoke machine if I break it enough and I'm looking forward to sitting on my ass at some point this weekend.

I was returned to the HQ this morning, to much rejoicing... well, I mean, I was rejoicing. And B seems happier, although I'm sure he'll miss being able to eat spaghetti and meatballs in his underwear with his feet up on the galley table while playing video games.   Just 48 hours, and as I expected, the work part was fine. Actually the work part was easy and pleasant... of course, I didn't sleep much to speak of. I never do, for the first few days somewhere new, until utter exhaustion sets in and I can sleep finally.

I think I mentioned how much I hate change. I'm not the most pleasant person during forced socialization, and not sleeping for 2 days doesn't make that better. Mostly. I'm writing now because I am doing laundry and in a little while, like the colicky baby I am, I am going down to sleep for a few hours so B can have some peace too.

On a positive note, I got a ride from Newark to Bay Ridge anchorage on my friend Tim B (of Youtube fame)'s tugboat. Always, when I hang out with Tim, we spend a lot of time laughing. Politically, he and I are probably close to 180 degrees apart, and it doesn't matter. I always enjoy his company; he's one of the handful of people I work with who I wish I could sit down with at a bar in our off hitches.  That's the way it's supposed to be and it's a shame that it is rarely so.

Anyways, laundry is about done. I'm for bed. I'm happy to be back on the HQ. I guess I can cancel my appointment with Dr. Kevorkian.

Ganked, or My Turn In the Barrel

Yesterday promised to be a good day.

The HQ is out at our favorite anchorage here in NY, with a cargo fixed for this weekend, giving us a few days off-hire, and an opportunity to turn our eyes inward for some maintenance.

Weather was nice, a bit overcast, and not too hot. I was up at 0445, as is my wont, and after breakfast, I pulled out a 5gal bucket of deck paint, a gallon can of nonskid additive, and some painting tools, and figured I'd get to rolling paint around 0700. I knocked out a few procedural things in the meanwhile, specifically the  NPDES inspection, an EPA-mandated weekly walkthrough where we look for sources and potential sources of things that could put oil in the water. As nothing changed in the last week, I took a little extra time to really look over the hydraulic hoses on our capstans and deck cranes where the potential for UV damage can make the outside layer of the hoses brittle. Nothing yet. The hoses are only about a year old, having been renewed after the last shipyard period. Oh, fun fact, I got Ganked last year (definition to follow) and put on the current HQ for a few days, whereupon on the very first job a hydraulic hose INSIDE the base of one of the deck cranes blew out, dumping 80 or so gallons of hydraulic oil into the crane's interior, which oozed out and had to be collected and cleaned up, as well as repaired. While it was pouring rain. It was a whole thing, and my 2nd man had just come back to work after a hip replacement, and was in real pain still, and refused to not help, making things more stressful, seeing a very nice and earnest person putting himself through agony. It sort of gave me a set against the then-future HQ, but actually worked out well, a systemic defect in the crane being found and fixed after the cleanup.

So, when 'Something'  (anything really, but the office never gets specific) happens, and a Qualified (read: has a heart beat and/or is not dead) tankerman is not available on board, the office will occasionally choose someone situated nearby whose week they wish to ruin and pull them off of their own assignment, and will give them 30-60 minutes to get their shit together and move them to another vessel for a few days. This is sometimes called being Ganked.

I've been ganked 3 times in the past year, and have been increasingly cunty about it. Now, I don't have the magical ability to say no, as generally, short of  *clutches pearls*  calling someone in  from home, there aren't always willing and smiling faces available, and, you know, being a tankerman and all is what I do. Do I feel picked on? Fuck yes. A combination of availability, bad luck and not being a bad tankerman conspires against me, as well as not having enough Fuck You Money to dare them to fire me for saying no.  I came close this time. I have a very good relationship with my shoreside boss, though, and I know he needed to put meat in the seat, and I didn't want to insult him. But fuck me, it's not easy.

I'm not a kid anymore. In fact, I forgot to bring my glasses with me here, and it's been a problem.

I don't like change. I like being alone, and working with my shipmates who know my ways like I know theirs, and I'm not someone who beings the A game when my wa gets disrupted. What does that make me? Other than a whiny bitch, I mean. I don't feel good about myself, being so perturbed by helping out elsewhere, but there it is. Sure, there's a part of me that wonders about fairness, as I don't know anyone with a permanent assignment who gets ganked as much as I do. I'm sure they exist, I just don't know who. But I do know that fuckups and aggressively angry people don't get ganked. I have joked in the past that I either need to start caring less about the quality of my work or pick fights with everyone.  And yet I realize I sound like a bit of a bitch here, or a prima donna. Maybe I am, or maybe I'm just a grumpy asocial coot who can't sleep and can't function optimally without a sense of permanence of place. Realistically, if I was more tolerant of impermanence, I'd be chasing the  higher salaries that some other companies offer.

And really, I don't mind working at all. The work part is fine. I can turn valves, type and sniff toxic fumes all day.  The increased risk of being unfamiliar with the workplace and the stress of being on a strange deck an in a strange bed is unpleasant. Being less than 15 feet away from a stranger the entire time is far more stressful. There's nowhere to go other than the bathroom for privacy. I can't talk to my wife in private, and must rely on the discretion of the other guy not to listen, as he hopes for the same in me. Close Quarters ain't innit.

Anyways, I'll hopefully be back aboard the HQ tomorrow, whereupon B, who has been keeping up the home front and likely playing video games in his underwear in the galley, will make fun of me for being grumpy and oversensitive.

This shit isn't getting easier as I age. On my personal wish list, being left alone more is currently #1 with a bullet.

#2 is still being reincarnated as Sofia Vergara's bicycle seat, so there is that, anyhow.