I recently had an opportunity to witness a Gestapo uh, secret police, I mean, Ministry of Peace Department of Homeland Security-led live action exercise in New York harbor. I damn near had to take part in it, which so infuriated me that I sat up off-watch and just waited for someone to come aboard so I could tell them to get off my lawn. Having no lawn, of course, and being Master after God on a piece of steel that doesn't actually belong to me, I would have folded like a chair had I had to deal with any pointy heads, but I would have been grumbling the whole time and giving them dirty looks, I swear.


Anyhow, my point is that I got to spectate on the spectacle, which failed to impress, certainly, though I'm sure that that was the point. It was part of our antiterror theatre drills, where government agents pretend to enhance our personal security, and we pretend to believe them.

I dunno if I'm a contrarian or not, but I call BULLSHIT on the whole thing. As we all know, the only people who have stopped terror attacks that were actually underway have been civilians. The Coast Guard, God bless their little hearts, continues to be horrible at everything except Search and Rescue, and I can only hope that all the folderol doesn't detract from or divert funding from their SAR mission. The DHS umbrella, agency, on the other hand, deserves to go back to our malls and protect us from skateboarders and litterbugs.

A few months after the government, in their wisdom, created the DHS and instilled panic on our nations waterways by insisting that Haji the bomb-vest  boogeyman was coming for us each and every day, and then responded by making our ports safer by not allowing American sailors to ever go ashore (or home), we sailors knew we was all completely and utterly fucked.

We also knew some simple truths: fences, convoluted port regulations, and a nationwide ID card that identifies you as a transport worker but really just helps keep the defense contractor who runs the program funded until someone buys their fucking airplanes, won't make you safe.

Being forbidden from going ashore won't make you more safe.

Ceding power to a government authority that models their port security plan on that of Berlin in 1940 won't make you more safe.

Jokes aside, US port security as it exists today is merely security theatre- it gives kids a job, and looks like something is happening, but in reality it's just another show, and once again we are to pay no mind to the men behind the curtain.

Everyone who works on the water knows that if someone wants to blow us up, they're not going to go through the portss to do it. They're going to put out from another boat, or from the shore, in a small boat loaded with explosives, and they're going to do whatever they're going to do. We can not stop that. All we can do is mitigate, and throwing inflatable go-fast boats with .50cals on the bow isn't going to stop that. A nice used 26' sailboat with a little outboard motor can comfortably hold enough explosives to launch me halfway to mars if that's someone's intent.

I get regularly questioned by uniformed folks who grade my responses on our security plan. What do I do if there's a suspicious box on deck? Call my office. No one is going to put a bomb on my deck and not be there to make sure I don't punt it and set it off where it won't do any harm. That's just logic. A poorly-planted bomb isn't going to do much on a tank vessel. These things blow up periodically on their own, anyhow.

No, as the US navy discovered after the Septmber 11 attacks, a fleet of disposable skiffs laden with explosives is much more effective at destroying a whole naval fleet than an equally-sized and equally-armed enemy fleet could ever be.


So why are we not seeing more effort in restricting small boat access to our ports? Because at some point, you have to accept risk if you want anything resembling access to places outside of a panic room. New York harbor is one such place. The most effective way to prevent a maritime attack is to ban maritime commerce. Barring that, you could ban all non-commercial activity on the waterfront, and that too, would be incredibly effective.
And yet, we haven't done either of those things and there have been exactly ZERO attempted terror attacks on US ports. Not to say that we shouldn't be vigilant, but I'd say it's patently obvious that we're wasting money for zero gain, and, since we're wasting the money anyhow, there's no reason why we can't waste less money and still put on our little show to be sure that the Department of State Security is still ready to protect your freedom by intimidation, threats of force and driving little boats 60mph everywhere all the time with machine guns mounted where we can all enjoy them. 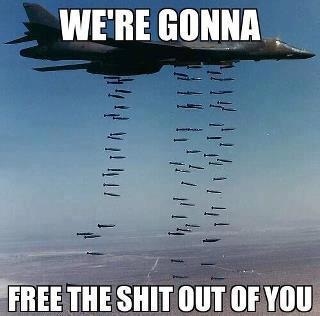 Come to think of it, why don't we take $700 billion out of the security show racket and  give it to Medicare? Problem solved.

oh yeah. ou hit that bone on the head.

oh yeah. ou hit that bone on the head.

Thank you Paul this was a good read. Once during a CG inspection,the officer was going to write me up for not checking his ID when he boarded. He said he could have been a terrorist, so I then pointed it out than if he was in fact a terrorist...my port Captain would not have been walking behind him! I did not get the write up, everyone had a good laugh.