Enjoying a liesurely midwatch, I looked out off our stern this morning into the heavens and saw Orion out there standing proud and tall. Yup, summer's over. 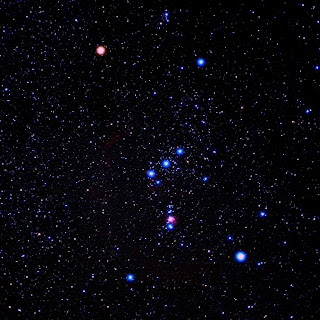 I discerned huge Orion, driving wild beasts together over the field of asphodel, the very ones that he once had killed on lonely mountains, he grasped in his hands a mace of bronze, never to be broken.

-Odysseus, in the Underworld, The Odyssey


With Betelguise, Rigel, Saiph and Bellatrix all in the constellation, it's a treasure trove for celestial navigators, not to be despised at all for its' additional benefit of pointing the way towards other easy-to ID stars that can be used in conjunction with one of the above for a 3-star fix, the gold standard in cel nav.

Line up Rigel (the right foot) and Betelguise (the left arm) and move upward, and you hit alpha and beta Gemini, the twins- Castor and Pollux.

Move from Bellatrix (right arm) to Betelguise and move to the left, and you'll hit Procyon (alpha Canis Minor).

The picture above is a simple telescope shot- the pink dot in the picture (visible with the naked eye but essentially colorless without the magnification of a telescope or a really good pair of binoculars) is the Great Orion Nebula, known romantically as M42. It is the only nebula visible to the naked eye, as far as I know.

Orion was always my favorite constellation because it was the easiest to identify.

And its pretty and stuff.