...if you've met my wife, you know why it is that watching this TV show is eerily like our day-to-day interactions.

something of a surprise

Apparently the South American side of my new family really took to the White Mountains. Heading back there tomorrow.
Posted by Paul, Dammit! at 4:08 PM No comments:

]
]No, I'm not dead and gone. Just on vacation. I'm thoroughly enjoying watching my Brazilian family shivering their way through the -10 temperatures in the White mountains. For people who view 75 degrees as winter temps, they're doing well, most of the time. My in-laws especially took to the region. I guess it's as exotic to them as the miles and miles of beaches full of women wearing little more than a eyepatch and a half-yard of dental floss are to us. 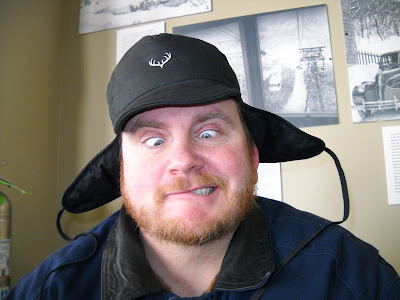 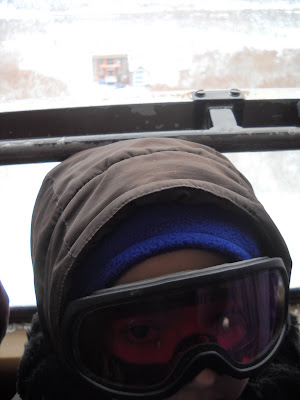 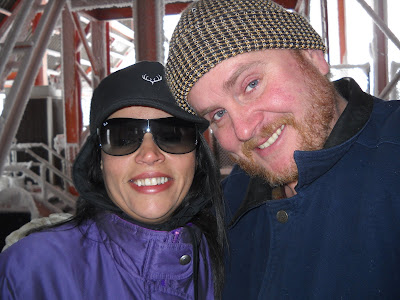 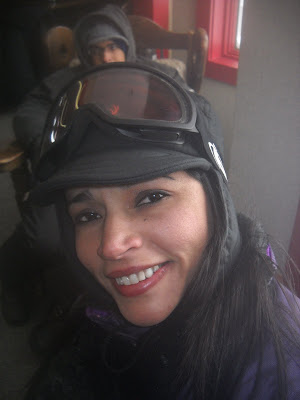 I'm pretty sure that my wife was the only woman on Cannon Mountain with 6-inch heels on her winter boots.
Posted by Paul, Dammit! at 7:33 AM 3 comments: 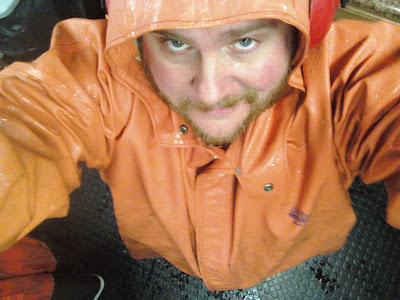 with my first month in New York just about behind me, there's only today to get through. Now, why is it that whenever someone says that, a long-ass day ensues? I rolled out of my bunk at just before midnight, and the sky is seriously pregnant, with two days of sleet and rain expected. So be it. I'm going to have a cold, wet ass for 12+ hours, but at the end of this next rainbow, during the overnight tomorrow, my own bed, complete with sleepy warm wife is on the schedule

I can live with that. But first, I have to ask why, why, why, in the name of the seven mad gods of the sea, it's always raining/snows/plague/locusts/frogs/men, etc, on crew change day?
Posted by Paul, Dammit! at 8:47 PM No comments:

Labels: do I look hydrocephalic?, it's raining men, sassy ass

Well, we got bombed in the latest storm. Again. I'm deep loading us with RMK-700, a nasty heavy fuel oil that has to be really really hot to flow, so already, just 2hours into the load, the water is trickling over the side in a few key spots. This is a good thing, because I'm tired of running around deck through the maze of pathways we've cut in the snow. I keep thinking their might be a piece of cheese at the end of the maze, but instead there's always an ullage point huffing gouts of foul, sulphur-laden warm air from the active tanks. Not exactly rewarding.

Speaking of which, does anyone out there know how I can clean a bomber-style float coat? I can't dry clean it, can't machine wash it, and it's starting to develop a certain gym-locker smell that brings back unpleasant memories. Any suggestions would be appreciated... by everyone around me.
Posted by Paul, Dammit! at 5:59 PM 2 comments:

The mariner at home: giving back

In a little over a week, I'll be heading home for what I feel is a well-deserved break. Somehow, I manage to always forget that I'm far more pressed for time and stressed when I'm home than at work. Being surrounded by the people I care about is enough to make up for the negatives. Anyhow, I'm looking forward to getting home.

This month I'm taking part in an educational conference (a frightening concept to those who don't know me well, I suppose) when I get home. Once upon a time I taught intercultural research skills to students who were preparing to carry out comparative sociocultural and socioeconomic research. My sub-specialty was gaining access to sensitive information- what I might today, in my greatly coarsened state, call "How to get what you want without the use of kneepads."

As I said, I've coarsened. I'm only dipping my toe this time. If my skills have rusted to the point where I can't help these kids, I don't want them to pay in the process. So, this being a pre-departure conference, full of last-minute tips and preparation, I'm planning on only being there to play Good Cop/Bad Cop and see how I do.

Somewhere deep inside me is still a practical-minded biologist. I think. In the 10 years since I gave it all up to run away to sea, though, I've gone from being a long-haired environmentalist who occasionally fished for work, to where I am today; Guns, God and Big Oil... pretty much the antithesis of the people I'm going to be surrounded by. Should be interesting.
Posted by Paul, Dammit! at 4:51 AM 4 comments:

thou dost protest too much...

I received my first Letter Of Protest the other night.
For anyone not in the know, a Letter of Protest is a document that is handed off when a responsible party does not want to be held responsible for something that they feel is your fault; they're protesting, and thus the name. While it's not a legal document, strictly speaking, it serves to protect the issuer from blame in the case of mishandling fuel, stores, cargo, equipment, etc, when something just ain't right.

And so it was that last listed circumstance that nibbled on my buns oh-so-vigorously the other night.

I was holding a pre-bunkering conference with some engineers, at my dinner table aboard, in fact, and we got hung up on a couple of items. One in particular was troublesome. First off, I will not go aboard a ship from my side- once my feet are off my own deck I have a 4,000 ton baby with no babysitter, so that shit don't fly. The engineers must come to me when they want to talk about how they're getting their fuel that day.
In the matter of transfer of fuel oils, witnessing and sampling of cargo as it changes custody is done under carefully documented circumstances using standardized procedures, as agreed under a heaping pile of applicable conventions related to commerce. Among the most humble and simple of these is the matter of how we ensure that we get a consistent sample of all the cargo in all the tanks- we simply collect oil just as it enters the pipeline stretched between the vessels. Upon sampling, the collected oil is decanted into sample bottles, signed by both parties, and sealed using a mechanical zip-tie like numbered seal. Simple.

Engineers being a fastidious bunch, and me being mortally afraid of running afoul of any of the literally thousands of applicable regulations and laws pertaining to oil transfer, this process usually runs very smoothly, with each party doing their part... so it was strange to me that the engineer freaked out when I told him that I would take my own samples, he could take his own, and we'd exchange, under each others' supervision, as listed under the MARPOL treaty.

The man in question had a controlled document from his employer that dictated how and where samples would be taken. This policy was rigidly defined, in excess of international regulatory standards, which is fine, if irksome. The problem was that the engineer wanted to take all samples from his sample port, aboard his vessel, under my watchful eye. His vessel being 50 feet taller than mine at deck level, and what with me having to actually manage the cargo discharge, plus the probability of being fired and/or jailed for fucking off when I was supposed to be keeping my eyes on my own deck operations, I was unwilling to concede that he take all samples while I remain a holy innocent, 50 feet under his rail on the other side of the hull. Plus, not to put too fine a point on it, I just don't delegate this sort of thing.
Now, being both polite and professional people, we worked out a compromise to our satisfaction. No Letter of Protest needed. We proceeded to pass papers and start the discharge shortly thereafter.

When all was said and done, hours later, we passed papers again, to sign off custody of the cargo and such... and there for me was my very first Letter of Protest relating to a different matter. It seems the engineer didn't like the form we use for our Bunker Delivery Receipt. I don't know if it was the color or the texture, but anyhow, in a grand game of CYA, I got my cherry busted, I guess, to be crude. Really, the details aren't that interesting. What was interesting (to me) was that his company's internal policies were in excess of international requirements in several different areas- in this sense, both of us were in unenviable positions; he found something he had to note (at the last minute, I suspect), and I was the deer in the headlights, sort of. In a game of mutual CYA, we both did our parts. To avoid potential butthurt on the home front, the engineer had to zing us, I guess, in order to dot his I's and cross his t's, and I had to graciously receive the letter, being aware that it was kind of bullshit, but such comments being nonconstructive.

Much like sex with Kobe Bryant, Letters of Protest are going to happen whether or not you want them, I guess. In the meanwhile, I duly signed the form (marked 'for receipt only,' because such things are above my pay grade and I am merely the manager of this floating gas station) and filed it, and we parted ways amicably. So it goes.
Posted by Paul, Dammit! at 7:19 AM 3 comments: