Well, I'm back at work. Settling in and it'll be a few hours before I have to take a watch, so I'm getting comfortable again. This was one of those times off where I actually felt like I was away from work for a while- a good feeling.

However, not work-related, and as such not great blog fodder. I'll write when something happens.

Halfway through my time at home, and it has been BUSY.

I live in south Florida, in a hurricane zone. As such, my house is stucco'd concrete, like 90% of the houses down here, and each window has been fitted for hurricane shutters- sheets of corrugated aluminum that overlap each other and get bolted over the windows if needed. 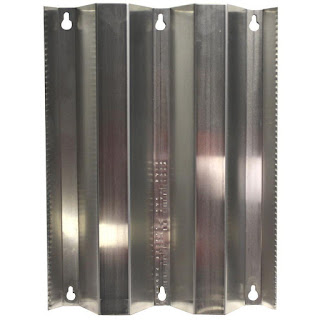 Each one is as long as needed, and about 15 inches wide. For example, over the French doors that lead from my living room to my pool , I need 14 shutters, 102 inches long each.

These things are NOT cheap. Anywhere from $30-70 each. And it turns out the guy I bought my house from took most of the shutters with him when he moved.

So, this week I finally got to inventory my shutters, and was very dismayed. What looked like a sufficient quantity of shutters was nowhere near.

The new B house is airy and open plan, 2 floors, and there are a LOT of windows. And a lot of doors.

$5,000 later, I have the raw stock, and am now cutting and fitting. I have a 24' ladder to get to the 2nd floor windows, and I've been spending a LOT of time dicking around on and with the ladder, getting up and taking measurements and getting intimate with a cut-off wheel and a grinder before cheating on my grinder with my drill press to cut out for bolts.

I am SORE. It's been a long time since I did this kind of labor, and it really shows. I am just achy as all hell and it's 90 and humid. I'm sore in a way I haven't been since I quit fishing.

I guess that's to the good. This is a case where it's the kind of pain that comes from weakness leaving the body.  I don't really mind it. It's the money. Everyone said the first year I'd just be hemorrhaging money, and they were right. I try to keep a bemused attitude.Hopefully it'll be years before I have to put the shutters up. This is my 5th year in Florida, and the first three, I didn't need to use shutters.

Aside from window dressing, it's been domestic bliss up and down the line. Getting to know neighbors, enjoying time with my family, painting and hanging curtains and shit. Been good.  About a week to go before it's time to head back to the HQ.

Well, we've been working pretty steady this tour- first half was a little quieter than the second, but overall it's been pretty steady. Even so, my relief should be here after my watch ends in a few hours, and then I can head to the airport.

Looking back, I didn't write much. Not much to write about. Sleep, wake, stand watch, rinse, repeat.

Hopefully a few weeks at home will break up the monotony.
Posted by Paul, Dammit! at 2:08 AM No comments:

I haven't been writing much. Still feeling uninspired, and a certain amount of mental constipation, I suppose. I enjoy trolling people online at times, just being sarcastic and shitty to those I find ridiculous, you know, just to pass the time, however, there being no shortage of fools online, it just isn't as much fun as it used to be, and I'm tired, so deeply, deeply tired, of EVERYTHING being politicized. News, opinion, information, identity... ugh.
I have never enjoyed participating in pop culture, or the workaday business of living in an ordinary way. I identify with Melville's lament in Moby Dick that when he began being tempted to just up and knock strangers' hats off into the street for no reason, he knew he was better off going to sea.  I am not writing because I am not reading the news much, and the workaday life of harbor watch that I've had hasn't been action packed of late, but also hasn't been bad, either. It's still better than riding the goddamned train into a job in a city somewhere. I don't suppose any sailor can find happiness there, or they wouldn't be a sailor.

In a little less than a week, I'll be back home again for my time off, and I'm looking forward to it extremely. I still have to finish putting my house together, do the things my wife can't in making a home out of a house.

My new 2nd man is entering his second week in the position- he was the trainee I didn't want a few months ago. Super nice guy, and I think he will work out well., though truth be told I worry for him, too. His job is not difficult; I've said before that you can shave a monkey and make a tankerman out of him, but the line between being employable and being good at your job is pretty stark. There are so many details and rules, and so much of what makes someone good at their job on here is subjective- knowing when to be angry and when to be patient with people, being flexible, proactive and observant, and knowing where rules and laws conflict, where to be flexible and where to stand ones' ground, which is not always clear.

One of the reasons I've found myself reluctant to move on from this job is that there are several parts of it that sync perfectly with my personality.  All people tend to get tunnel vision when stressed and managing multiple data inputs, and as a result, start to focus more on the familiar, easy to understand things.  In a Ship Simulator class, used to be called Intermediate Shiphandling, the instructor and computer operator keep adding in new details to an evolving situation, until you fail at it. The end result is that they identify where you stop integrating new information in and focus on the information you already have to the exclusion of other, harder to interpret data. In my case, it was a down current transit around Algiers Point in the Mississippi river. The situation evolved into something I couldn't handle, and I lost it at a certain point, taking out the docks on the New Orleans side, which was actually pretty good, as I didn't end up on the beach. In watching my own results and my classmates' in other situations, I got to identify the gut feeling when I hit my limit of being able to handle new information.
Well, I never forgot that lesson, and I like the fact that when life is throwing poo at me like an angry monkey, I can narrow my focus to my own deck if I want, and just focus on my job, and let our deckhands and tug operators do theirs until I feel better. There's a certain amount of laziness there, too, but it serves a purpose for me.

So, while things have been boring at work, sometimes boring is good.