it could be worse I guess...

Last night I had one of the most frustrating jobs I've ever done since I took up bunkering as a full-time gig.

Nothing abnormal about the job. We were fueling a product tanker in a shitty anchorage, one we don't often use because it's exposed to some swell, and it was blowing some, and there was a small swell, about 2-3 foot. No big deal. I had a tugboat with me, but it wasn't one of our regular experienced NY captains, but an out-of-towner, and he certainly didn't feel good about what was going on.

Look, some motion between the bunker barge and a ship is OK. Moor properly, and your mooring lines will absorb shocks and work together. When there's an equal strain on all lines, shock loading lines isn't so much of an issue. I did NOT like bunkering in 8-10 foot swells last winter down off of St. Maarten, I'll say that, but we did it. Given that, bunkering an an obnoxious chop is just that, obnoxious.

Once we were free to actually do the cargo transfer, the ship dragged ass. Oh, my Lord they were slow. No shit, there was ample crew, and no multitasking. While the AB's were taking the blank off their manifold connection, I couldn't swing my crane and run a cargo hose to them. While I was running the crane, the engineers could not sign papers. While the men were connecting my cargo hose to the ship's bunker manifold, the surveyor could not gauge tanks. Literally, only one thing could happen at a time, despite there being me, 4 deckhands, 3 engineers, a cargo surveyor, and a partridge in a pear tree on hand. At any rate, it took 11 hours to do a job that should have taken 4. By the time I went off watch, I had a headache and was hoarse from screaming. On top of that, the engineers insisted on spending time going over paperwork in my galley, and I'm not kidding, they smelled like onions and hot garbage. One guy looked over my shoulder, and, God help me, I gagged from the smell. I've got an iron stomach for that stuff. I used to dissect sharks one handed while eating a tuna salad sub with the other, or do things like stick my upper body into a bait barrel and hang suspended by my waist to get the last herring out. In July, after the herring had been outside for a few days. But no, these guys smelled so bad, after I showered and went to bed, I smelled my T-shirt from my laundry bag, which was under my bed.

But you know, today's a new day, and it marks 14 days on board. Couple weeks to go, and I'll be home to Inappropriately Hot Foreign Wife, who, without fail, always smells nice. And realistically, it really could be worse. I mean, check this out: 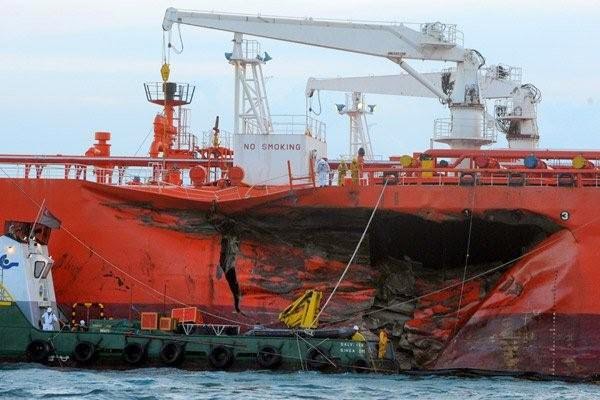 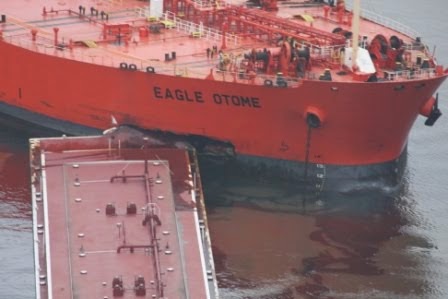 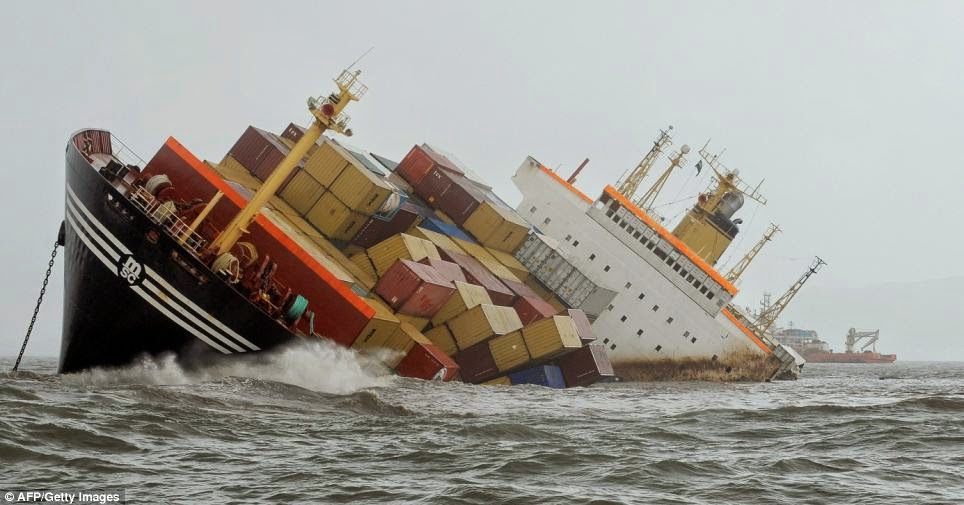 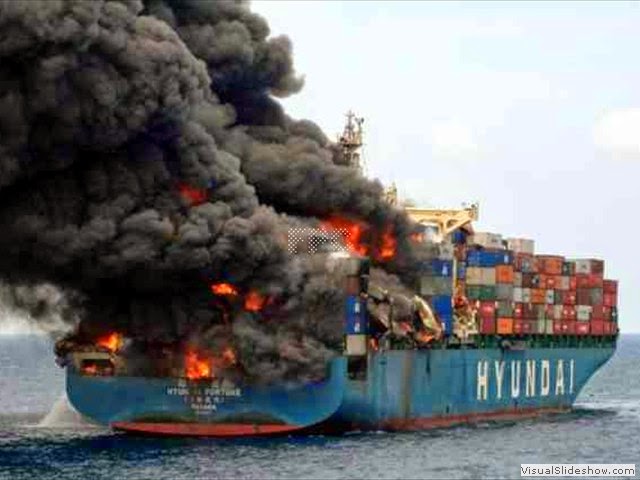 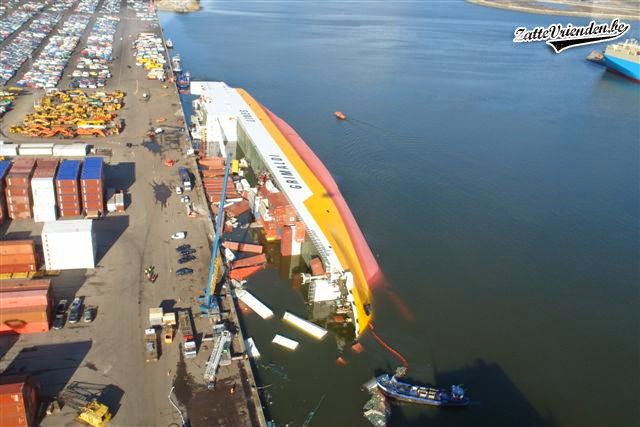 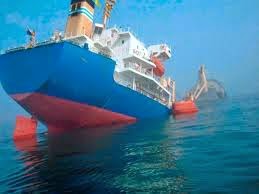 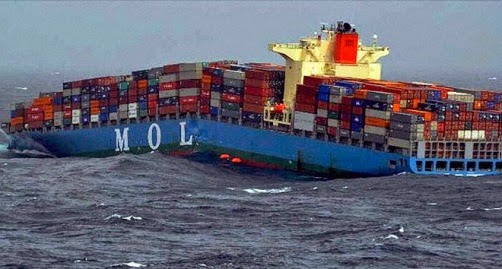 Kinda puts things in perspective. I'm suddenly very conscious of the times I screech "No no no! He's gonna scratch my paint!" when a tugboat struggles to push us squarely alongside a dock or ship.   Suddenly I feel kinda like a prick.

Have a guilty laugh on me 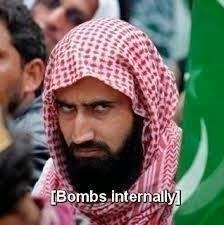 Shame on us all.
heehee.

He rose at dawn and, fired with hope,
Shot o’er the seething harbour-bar,
And reach’d the ship and caught the rope,
And whistled to the morning star.

And while he whistled long and loud
He heard a fierce mermaiden cry,
“O boy, tho' thou are young and proud,
I see the place where thou wilt lie.

“The sands and yeasty surges mix
In caves about the dreary bay,
And on thy ribs the limpet sticks,
And in thy heart the scrawl shall play.”

“Fool,” he answer’d , “death is sure
To those that stay and those that roam,
But I will nevermore endure
To sit with empty hands at home.

“God help me! save I take my part
Of danger on the roaring sea,
A devil rises in my heart,
Far worse than any death to me.”

a smell grows in Brooklyn

We've been lucky enough to have a short break here at HAWSEPIPER's Afloat Global HQ/fitness center. To put the cherry on top of that, we are lying to at a lay berth in Brooklyn that has shore access, which means that little things like my daily walk aren't limited to a dizzying and soul-grating series of hours spent walking in circles to get my daily walk on. Instead I get to go ashore. Which I did. Morning and evening, I did a 5-mile circuit through Red Hook, Park Slope and Cobble Hill, past Project high-rises and $3 million brownstones in the same 2 hour walk. I managed to get 3 of these walks in in a little over 24 hours. Later this afternoon it's back to cargo ops, which is fine for me, as I'm bloody tired between the walks, being on a pretty strong calorie deficit, and the upper-body exercises which are shamefully kicking my ass roundly.  By next weekend I have high hopes for hitting the weight I had in my sophomore year in college.

The one observation I can share about Brooklyn is that regardless of whether I was passing through the 'hood or upper-upper class Brooklyn, the whole borough as I experienced it smelled the same. In the morning it smelled like hot garbage, that cloying, not-quite gag-inducing smell that makes you want to frown. In the evening it smelled of dog piss and shit, as the awful people here seem inclined to keep large dogs that belong on a fucking farm or in a rural area in apartments slightly larger than my bathroom at home.

Seriously, as the sun goes down, the ammoniac smell of piss was pretty pervasive. I saw a lot of Great Danes, Bernese Mountain Dogs, grayhounds and Mastiffs.  Poor fucking dogs, living like that in an urban area. As a kid, we had a husky that would gnaw on the kitchen table if it stayed inside for more than 90 minutes.

Still, in a life full of unpleasant smells (bunker fuel comes to mind, which is what we carry), trading the sulfur stink of heavy fuel for the smell of sad 120-lb dogs is a lateral move to me. At least I got to do some people watching.

Best 2 weeks ever. Well, at least it was the best 2 weeks' vacation in my adulthood.

My honey-do list was impressive. Inappropriately Hot Foreign Wife decorated, I paid and did the labor. Bought plants for the lanai, slept late once or twice, drank a bottle of expensive scotch (my wife tried scotch for the first time but based on the quiet, subdued wife that spent the next morning on the couch, that may have been a one-time experience).

I sold my beloved truck, too. My new one. Fact is, I don't need 4-wheel drive and a big-ass hemi in south FL. And also the fact that the space in my 2-car garage here is exactly 3/4 of an inch longer than my truck may have tipped the scale.

So now I'm in the mommobile, too, and no longer will hippies cry tears of impotent sadness when I chirp the tires taking corners in the 3-tons-o'-fun.

Eh, I might be OK with being in a 1-car family. I'm not home all the time, anyhow. If not, there's always plenty of sports cars for sale local to my house. Seriously, within 5 miles of my house there's dealers for Porche, Ferrari, Jaguar, Lamborghini, Bentley and Aston Martin. I love where I live.

Think they'll do a layaway plan?

You know, I've lost about 20% of my body weight as measured on Jan 1 of this year, and I'm still kinda fat. That's a bummer. Still, I'm moving in the right direction. Got another 50lbs and I'll be at my idealized weight. Anything more than 30 and I'm going to be rolling down the aisles singing alleluia.


So, yeah, I'm home. Money's hemorrhaging from both ends as we decorate, buy plants (and beer. Holy shit it's hot. I have absolutely no desire for whisky) and get used to it raining for 30 seconds every 45 minutes or so. Seriously, it's rainy as balls.