What I find interesting is that this piece is full of bullshit, straw men, begging the question, and false logic... pretty much all crap, even where it manages to be right.

Honestly, I don't give a fuck about this issue. What I care about is how stupid this article was. I suppose I should not be too surprised, given the forum. I've never heard of "self" but I assume that it's kept behind other fine quality publications on the bottom shelf of the impulse buy rack at the local grocery store.

"Times points out the trend of more and more couples sleeping in separate rooms. Nearly one in four American couples does so and, according the National Association of Home Builders, it's expected that 60 percent of custom homes will have dual master bedrooms by 2015."

...AAAANNNND, our aging population, with the largest grouping (the baby boomers) now approaching retirement, and said group being also the most suburban and affluent of the middle class in the US... well, that's the group who're building custom homes. Joey and Susie Newlywed aren't pouring over architect's plans. They're trying like hell not to end up in a 60-year old single wide.

So, there's the demographic completely misidentified. The article mentions nothing about the subject group being the pre-fossils among us.

Is anyone else not surprised that old folks don't want to share the same bed? I've shared a bunkroom with an older guy, and he used to cough and fart all night long, and the only way to tell the difference in the dark was to wait and see if the smell of saurkraut or ass was going to be the reward.
This article is not about old people, however. It's about all married couples. It contains some bland platitudes obviously written up by someone who wasn't married, but who's parents were, at least for a little while. And, like any crap based on behavioral science that doesn't actually contain any evidence of scientific thinking, this shite is presented under the umbrella of 'women's health,' which also leads me to a sense of wonderment. Why do women's health articles have to pass a bar set so much lower than men's health? Aren't we supposed to be equals? There's no way that this crap would be found in a men's magazine. The smell of bullshit is too pervasive; the force is strong with this one. 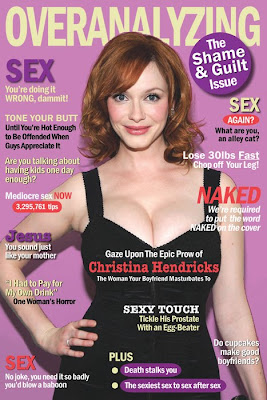 Like so much of what I see in magazines, this article is full of high-school level logic, and based on... well, I don't know what it's based on. It's like the author went to a dog pound to research parakeet breeding. Since, I'm sure, 'Self' magazine contains lots of pictures to help the less literate among us, and since every other article has to be about all the sex we're having and not having, I shoudn't be so surprised- the target audience isn't likely to pick up "Self" with their copy of The New Yorker. Still, I hate to see bullshit baked in a pie and presented as chocolate cake.


I guess it's like my dad used to say: "Imagine speaking with someone who is only of very averge intelligence. Half the world is less intelligent than that person."
Posted by Paul, Dammit! at 11:29 PM

and you found this publication in the head of which ship?

Reminds me of the Congressional Record

Bowsprite is entirely correct. Men only read women's magazines in the head, when we're at our most vulnerable. I guess we're gluttons for punishment.

BTB, I actually read a Cosmo article on sex tips to please a man... completely and utterly awful... and mostly wrong. The suggestions were mostly painful-sounding, leading me to believe that apparently women who read Cosmo are into S&M.