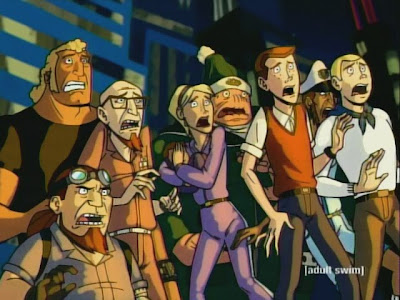 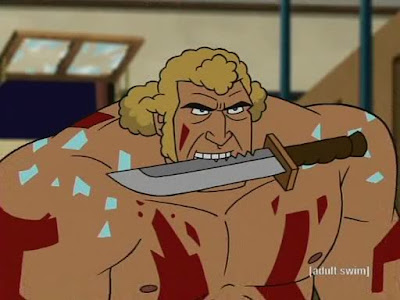 
For those of you who have yet to experience the joy, the above quote comes from The Venture Brothers... More specifically, from the end of the latest season premiere.

The Venture Brothers is, sadly, among the best-written shows on television... and it's a cartoon, obviously. It's almost impossible to describe the series- Hank and Dean venture are two very stupid but well -meaning teen boys raised by a single dad who is a hack superscientist living in the shadow (and profiting off of/riding the coattails of) of his dead father. The family's bodyguard, Brock Sampson (with the mullet), is a murder machine obsessed with Led Zeppelin. The family needs a bodyguard because Dr. Venture, the boys' dad, has a certain moral flexibility, bills to pay, and a fondness for prescription drugs. Dr. Venture is being stalked by an unlikely villian dressed in a butterfly costume, whom he must deal with from time to time, while attempting to market his often illegal inventions to the US government.

The show is worth watching. What amazes me is that the plots, gags and characters are interwoven seamlessly throughout the four years that the show has been in production. Character interactionfrom the first episode directly affect the plot of the 40th episode.
The show is full of simple humor, as well, for people like me. Dr. Girlfriend, the sidekick/girlfriend of The Monarch (the principal antagonist among a laundry list of antagonists, all organized and unionized by their shadowy leader, David Bowie), is a beautiful woman who looks and dresses like Jackie Onassis... except that for some reason she's got a man's voice with a heavy Bronx accent.

I give The Venture Brothers two big big thumbs up. It takes a couple of episodes to really grow on you, but the fact that a 35-year old man who never much went for comic books and cartoons (even as a kid) endorses it, should tell you all you need to know.
Posted by Paul, Dammit! at 1:58 PM