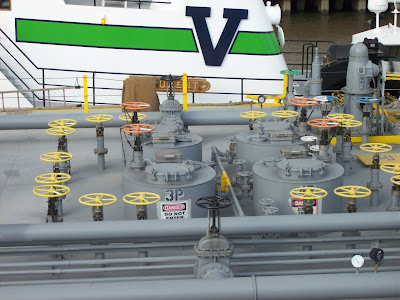 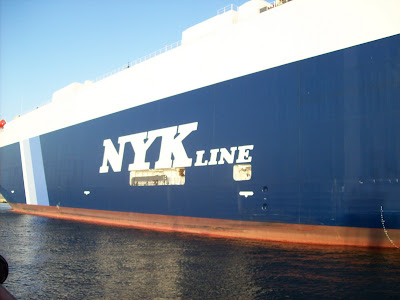 A Pure Car/Truck Carrier (PCTC) is about as ugly as a ship can get. They're built for function, not form. Thousands of cars and trucks get stuffed into these things for delivery.
Under the 'E' of 'Line" is the hose manifold, where fuel and lube oils are loaded. The slightly larger opening is an accommodation ladder for taking on pilots and crew and such. 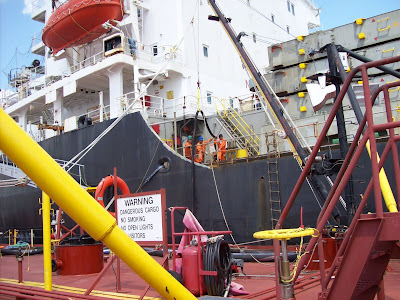 Here we are sending a small diesel transfer hose to a bulk carrier. Large ships use heavy black oil for their engines, for the most part, but diesel is used to start the engine and while the ship is maneuvering in and out of port. For that reason, while we deliver anywhere from 300 to 2,000 tons of oil to fuel up a ship, we often deliver only 30-200 tons of diesel, which is much more expensive. 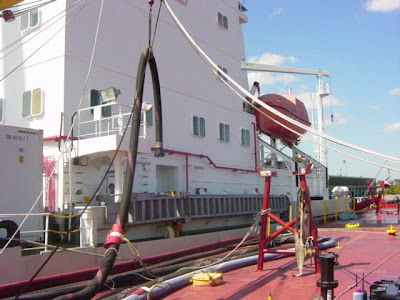 Here a heavy fuel oil hose is being sent over to a reefer ship. The hose itself weighs in at about 3/4 of a ton. Maneuvering and positioning the hose is done with the aid of a boom, but there's still a lot of brute strength involved. You can see all our various hoses laid out on deck. We're ready for any occasion. 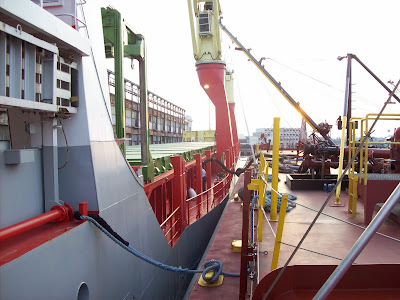 This is a brand-spanking new small bulk carrier. She was carrying cocoa beans from Brazil to Philadelphia. Cocoa beans smell like hot garbage. The bugs enjoyed this immensely. The crew did not.


In other news, my dad came home from the hospital late last night. This is the first time of his many, many hospital visits where I feel that he was sent home too early. Considering that he had a tube stuck through his chest that ran into the pleura of his lungs, and said tube was removed only 8 hours before he was sent home, I have a suspicion that this may have been an insurance-influenced decision. My folks have top-notch insurance, so this is a disturbing thought. Anyhow, he's happy as can be to be back home, so that makes me happy for him.
Posted by Paul, Dammit! at 5:55 AM

I'm deeply offended by your characterization of Pure Car / Truck Carriers as "Ugly as a ship can get". There certainly is beauty in function and if you spent a couple of years on them you'd know what I mean.

Actually I'm full of it, as ships go they are ugly, but still...I have a soft spot for those big ramps and 13 decks of efficient rolling cargo stowage. And they ride so nicely.

Do they really ride nicely? I imagined them to be a shit show! I do know that they are one of the last places where there's an opportunity go ashore in neat or exotic places during a voyage.

i like this post on the smell of various cargo, like cacao. a friend from way back used to love the smell of coffee in the hold. keep up the good work.