The other night, I got to play catch-up with The Notorious B.O.B., the guy who helped me get my captain's license and gave me my first two captain's jobs. For anyone who hasn't been reading for longer than the past two years, The Notorious B.O.B was the captain and eventually became the owner of the last commercial fishing vessel I worked on, the mighty Rita C (named after his mom).
For 6+ years Notorious B.O.B. and I fished together. In that time, we had harsh words a grand total of two times, when we discovered that I turn into a raging dick when the weather goes above 100 degrees. After that, it was mostly laughs and bruises, but not much money, which is the calling card of the southern New England lobsterman.

The Rita C was sold just a few weeks back, signaling the end of an era for the both of us. The B.O.B. is the captain of a research vessel now, which is apparently unexciting but reliable work, pretty much dead opposite of days past.

When I started working 0n the Rita C, I had left my last full-time legitimate job as the designer and manager of a hideously-located and ultra-intensive fish farming enterprise. This was a half-hearted attempt to be a legit marine biologist again, and, it ultimately failed. I had already killed my golden goose, leaving a job at a prestigious research lab to go fishing the year before. As always, when the horseshoe crabs started beaching themselves in May (a sign that coincides with the inward migration of lobsters to more shallow environs), I started wandering around the local fishing pier 'just to look around,' and, as always, I found a boat that was looking for someone, and promptly quit my job. That guy was The Notorious B.O.B.'s father, and that was how The B.O.B. and I came to fish together.
You can't go through what we went through and not be friends for life. The September 11 attacks come to mind immediately, but other stuff, mostly mishaps that turned out well, also play a part. The fact that we both had the emotional maturity of a 10-year old comes into play, and all the laughter made a hard and dead difficult job something that we could live with.

The Rita C is gone now, and all my great pictures from her are still sitting in a dead laptop in a closet. I need to cannibalize that thing and get them out.

The hardest part for me is that I have started wandering around the same local pier when I'm home.
I'm just looking around. 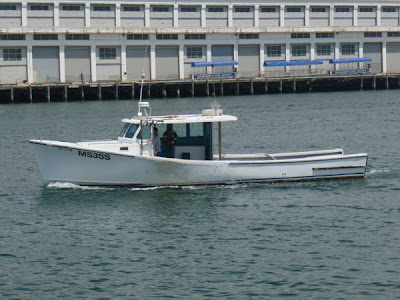 What R/V is he running these days? If he has the personality to handle the prima donna PhDs that think they can run boats however looks good on paper, he'll do just fine.

Also what was the Aquaculture outfit you worked for? Back in 2000 I interviewed at a small outfit on the Cape that seems to fit that description..