Despite the rather grand scale of a modern ship, the actual living quarters are modestly sized... in that sense, it's a fine training ground for learning how to live with acquaintances, friends and total strangers without resorting to violence on a day-to-day basis.

And that's a good thing. Men being men, we don't do well under normal circumstances in close quarters unless there's a chain of command or other hierarchical power structure to keep things organized. 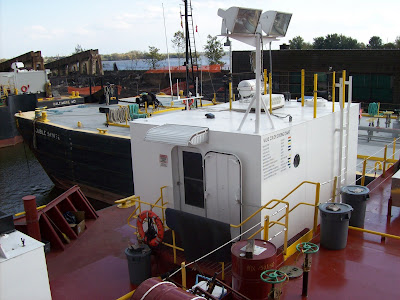 You might guess where this is going. I've said before that it gets tough, living in a 12x17 box with another guy day in and day out.

One thing that entertains me to no end is how young my opposite is. He's 25, and an old salt of 5 years of vast experience. Now, I do NOT consider myself an old salt... anymore. Hurricane Ike last year beat the ego out of me. Even so, I've been messing about in commercial boats for a living since I was 16, really, although I was lobstering from the old age of 7. And I am NO master mariner. When I meet an expert, a true old salt, I am always astounded at the little things that I learn, things that aren't taught in our modern era.

Anyhow, my opposite is young, and has had some experience with boats. He's unreserved, southern, and I would guess that somewhere there's an explosive temper in him. In some ways, he scares me, because he's never had an oil spill, and isn't afraid to make waves. Now, I've never been responsible for an oil spill, but I've been part of several of them, and they are 100% awful. I fear for my future, because people get arrested now for the accidental release of oil into the water, regardless of whose fault it is. "Someone is going to be thrown under the bus", is how it goes now on a federal level. But I digress. My opposite is a young guy, and like all 25 year olds, he's 8-foot-12, bulletproof, and always has his "fuck you money" (enough money to get by in case one needs to suddenly find a new job) on standby.
I am 10 years older, and see a lot of myself 10 years ago 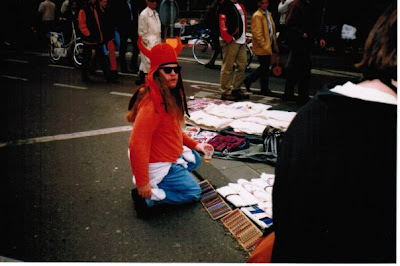 (Yes, that was my real hair, and yes, I was drinking. I still have the hat).


in the young'un. Now I am older, cautious, and aware of public perception of me as a professional, all the things a 25-year-old is not. As a more experienced and better travelled mariner, I am comfortable with foreign sailors who might not understand my English, and I am not one to cuss a man out for being Filipino.

As an aside, it amazes me that so many American mariners don't understand that cultures that emphasize reservation in the face of rudeness usually find a means to balance the equation after someone calls them a monkey or a stupid foreigner... This is why I see guys cover their heads when coming alongside a foreign ship. For some reason, a lot of guys, the youngster included, think that foreign sailors won't understand snide comments... and then the affronted but poker-faced sailor will throw a monkey's fist (imagine a ball or rope as hard and heavy as a baseball) directly at their head.
Now, I happen to get along well with Filipinos, mostly because I have sailed with a lot of guys from that country. I can speak a few words of their language, and I butcher it enough that they can understand that I'm trying to be friendly. Their culture emphasizes politeness and deference to strangers. Mine... does not, but politeness is a class thing with me, and it always pays off. I've never had a monkey's fist thrown at my head, anyhow.
Posted by Paul, Dammit! at 8:41 AM

As far as your sapce issues are concerned I'd advise you strongly to net get bustedfor a felony as 12 X 17 would be considered a mansion.

I know photos are tough yet I really look forward to yours. What does it look like inside that thing?

Where is the head, shower, cubboard?