Death vs an oil spill: an ugly truth


Here's a tough situation for you:   In a channel, constrained by draft, a partially-loaded small tanker encounters a very small pleasure boat with engine trouble. Watch the video.

Here's my take on it: The ugly truth is that in some situations, it would be easier for the officer of the watch to run down the boat rather than leave the channel and run aground at speed... Not sure if the video just didn't capture the ship blowing the whistle or not, but I would have expected someone to be blowing the danger signal like a madman.

I'm not going to quote the relevant rules of the road, which do apply here, but this is an obvious lose-lose situation. The OOW on the ship would be strung up for not doing everything possible to avoid the collision... but if he ran aground and caused environmental damage to a protected animal habitat (which is a thing), or, heaven forfend, a hull breach leads to an oil spill, said OOW is going to be crucified.

I value my ass as being worth more than that ship, the oil and a pile of dead and fouled animals stretching from here to the moon.


I've been on both ends. The Notorious B.O.B. and I once gently planted the Rita C's bow in a mudflat to let a ship go by about 20 feet past our stern in the Fore River channel up in Boston Harbor. We were in touch with the pilot the whole time, but he did NOT like our decision to do so, but we were in the middle of a 25-pot trawl (traps strung 15 fathoms apart on a single groundline) of lobster traps, and judged the maneuver safe if marginal. That being said, we were under power and could have beached the boat if necessary to get out of the way. As it was, all went well but we agreed later that we should have cut and run.

From the other end, when I was sailing as Able Seaman on the tanker New River, and I was steering us out of Tampa (All AB's are qualified quartermasters, or helmsmen) on July 4 one year, a boatload of drunks cut across our bow while in a very shallow channel (we had two foot of under keel clearance, which is pretty normal), with coral stands on either side. The pilot had me make a small course correction (2 degrees, about all we had to work with) to try to maximize the small boat's chance of survival. The bow lookout flipped out and was screaming over the radio, the captain was leaning on the whistle, blowing the danger signal, and the pilot looks back at me, sadly, and says 'steady as you go, now,' meaning: hold this course.
In the end, our bow wake grabbed the boat, flipped it on her beam, and pushed it aside. The drunks managed to stay in the boat, and once the boat was past our bow, the pilot had me reverse the rudder and swing 4 degrees over to get the boat away from our stern, which had a wineglass-shaped hull and could easily suck the boat in. Which it did not, thankfully.
After it was all over, the pilot looked at the captain, grinned, and asked the captain if he had her for a minute. When the captain said yes, the pilot says, "boys, I'm gonna go back and have a piss, check my drawers. Might need to borrow a pair of skivvies from one o' you."

Shit like that happened on the New River. More often than you might think. Sailing on that old tub was an adventure. 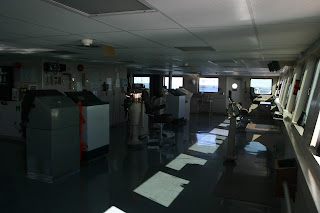 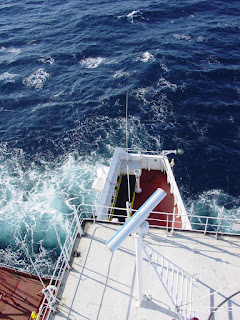 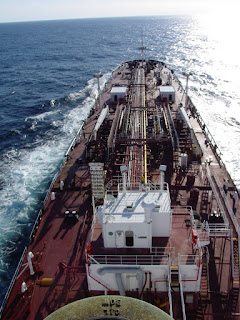 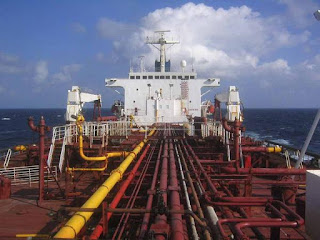 The tanker pictures... which ship is that?

Mass and (no) maneuverability = right of way.. Any small boat operator who ignores that rule will soon be a late idiot...

1. Of all the times to take off your life vest.
2. I always associate those life vests with bodies recovered from the water, not survivors. Don't skimp on PPE.

I was in a similar situation too. I was sailing as AB on the SeaRiver Mediterranean (ex: Exxon Valdez). We were coming into port in Rotterdam. Fully loaded, constrained by draft in the channel. I had just taken the wheel, 0400. My partner was on the bow as lookout.

He called in a fishing boat fine on the starboard bow. We had 2 pilots plus an apprentice on the bridge. The (just promoted) captain, chief mate and 3rd mate were there too. The pilots said "don't worry, he'll move" to the captain.
A few minutes later, the lookout called again. Same report. Same response from the pilots.
A couple of minutes later, the lookout called the captain to inform him that the fishing boat was yelling at us to 'get the hell out of his way', he insisted he had the right of way since he was fishing!

The captain was starting to get nervous, he asked the lookout again, 'you can HEAR him yelling?". I was getting nervous too! I was thinking, "I'm due to get off and go home this morning and they're going to order me to run over a fishing boat on the EXXON VALDEZ!". As AB, I had to follow orders, none of us on the bridge could see the fishing boat anymore anyway. The pilots kept insisting the fisherman would move (he would NOT!).

After we tied up, I talked to my watch partner. The fisherman would NOT move, his outriggers scraped down the side of our hull with him cussing us out the whole time! He was screaming how he was going to make us pay!

Not a big deal to the pilots, but my hands were shaking when I got off the wheel and I'm pretty sure the captain wasn't feeling too cocky either. I know I'll never forget that trip.

I don't have any stories to compare to yours, but my one trip down Lake St. Clair was educational enough. I was at the helm of a 1948 Matthews sedan (40', 3' draft, 13 tons) downbound, watching oreboats upbound and little sailboats tacking back and forth between us in the channel. The shipping channel in St. Clair is 24'-27' as I recall, and if you're not in the channel you're a pedestrian, according to the chart I was using. Nothing came of it, but I'm thinking the oreboat pilots had to be wondering what to do if one of the sailors got himself in irons at juuuuust the wrong time. My whole thought process was "Give everybody room, don't do anything unpredictable."