Shoe's on the other foot. Give me a minute and I'll explain why.


We've got a fruit fly infestation here at HAWSEPIPER's Afloat Global HQ/Vivarium, and I can't find the source.

In the far off year of 1997, I was in my junior year of college, and dead-ass broke. I was pumping gas at night, lobstering on Saturdays, and my department at school quite mercifully and illegally hired me twice under two names as a work-study student, so that I had at least 20 hours of work in the labs to help make ends meet while school was in session. In between semesters I was hired full time, which also helped.


One of my least favorite jobs came once a month or so, when I had to clean out the genetics lab's fruit flies.


In Genetics 101, students track the heritability of mutations across generations of cross-bred fruit flies. The damn things have a life cycle measured in days, so it's an easy way to observe how animals inherit traits and how breeding affects that... and the vials, once examined after a week or two (to let a generation pass and measure the passing on of traits before selecting the next generation, which is moved to a new bottle), are left to ferment, in which case they quickly contain thousands of flies in a very small space.

Well, my job was to dispose of the vials of flies. I would gas them then autoclave them, cooking them in steam and throwing the resultant sterile melted pile of plastic and organic matter in the trash. 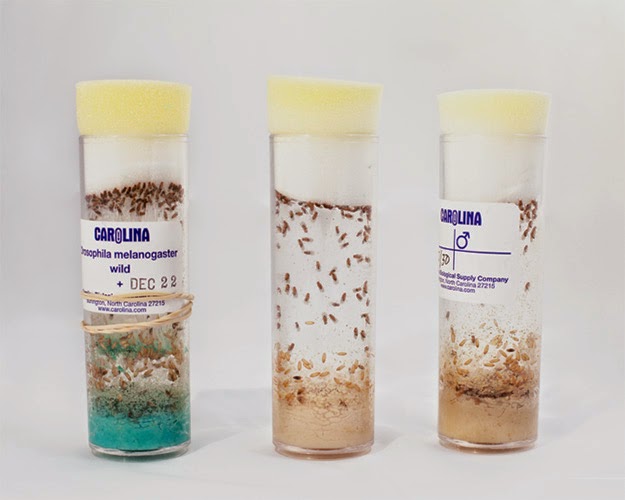 Well, I had about 300 of these vials, and they were old, containing several generations of flies. I figure about 5 million or so.


Now, I've told this story before. My department was on a floor that had an atrium corridor on one level between two buildings, which connected the Biology department with one of the floors of the university's law school one of Boston's most prestigious one of those awful places, in fact. And the law students, much like escaped animals, got everywhere, constantly underfoot, which really sucked for yours truly, who, virtue of being 6' 240lbs, was used for moving furniture and heavy lifting of noxious and frequently open-topped bulk vessels of various unsavory liquids. I ruined a lot of shoes, not always mine, is what I'm saying, getting bumped and diverted by these a-holes.

So I did what any other poor yet annoyed students would do. I used the Law School's bathrooms exclusively, never flushed, and spoke loudly using my wicked strong south-of-Boston accent and colorful fisherman's vocabulary where I could. I made a habit of saying "Hey, how the fuck are ya!" a lot when there were visitors.

...and then, finally, the fruit flies. It happened when a goddamned parcel of WASP's got into my hangout, an unused room full of lab tables that my friends and I had taken root in. And they wouldn't leave. I solved that by depositing a dead cat soaked in formaldyhyde directly on the slate table they were using for their study session. I mean, I slapped that fucking cat down with a body slam. No tarp, no dissection tray, just threw the cat down, sat in the vacant chair, ate my sandwich, drank a soda, belched loudly and said "Hey, sorry, I gotta practice neutering these things here."

If you don't know, formaldehyde smells like ammonia, ass and oil. It's nauseating.

Well, they left post haste, and I returned the dead cat to the barrel of dead cats n' formaldehyde and cleaned up, but I was still feeling resentful. And the department head then asked me to dispose of the fruit flies. Just a shitty day... but then I was inspired. I quickly anesthetized some vials full of flies (you pump CO2 in there to knock 'em out, then uncork the vial and put a drop of ether in there to put them to deep sleep.), combined them into one vial containing a million or more of the little bastards, pocketed the vial, walked to my favorite bathroom at the law school, and upended the flies into a neat pile behind a toilet, and then walked out.

Well, it worked out well. The flies woke up later, and caused a fuss, somewhere between distracting and infuriating, and I went back to work feeling much better.

But, right this moment, right now, as a goddamned fruit fly is running back and forth across my computer screen, I'm wondering if this is God doing his version of a Wet Willy to me.

Somewhere, a banana has gone to its reward.

First thing I did when I started looking at our fruit fly problem, was look at my beloved pile of bananas, but no dice.

Simple DIY fruit fly trap: you can bait it with cider vinegar or old fruit or fruit rinds. (Remember, time flies like an arrow but fruit flies like a banana.)

And it's a HUMANE trap! You can let the fruit flies go free after you... sorry, I can't finish that and keep a straight face.

Seriously though, I used to have a real problem with fruit flies in my kitchen in the early fall. (They'd come in on fruit I bought at a local supermarket.) I didn't want to spray in the kitchen, but a quick search online came up with this trap design. Depending on where you place your traps it can take anywhere from minutes to days before you catch anything, but they WILL come.

I usually just let them stay in the jar until they quit twitching, then dump them down the head, re-bait the jar, and set it back out until I quit catching them.

Your flies might be hanging out in the A/C ductwork. Dust damp with condensation is a popular vacation spot for fruit flies. We had that happen at an office where I used to work. In the Fall when we'd start switching over to heating at night it would drive them out and they'd gather on our secretary's potted plants because the soil was moist. I made a couple traps for her and they were gone in a few days.

Loved your law student treatment. You are a great American!

I knew there was a reason I liked you, man.
Great story.