act the Second of "if this catches lobster, Bob... I quit."

Read part one here. When I get to the end of this, you'll be glad you did... I hope.

The next morning dawned hazy and still, full of promise for a scorching hot day with little in the way of a breeze.

Getting the bait on board was something that I usually started, and the B.O.B. and I would finish it together. I usually showed up 5-10 minutes earlier, as the B.O.B. stopped at Dunkin' Donuts for our morning coffee while I checked the engine, warmed her up and started pulling bait out of the cooler.
Now, in my particular corner of New England, we have diurnal (twice a day, regularly spaced) tides of about 10-11 feet on average. This means that when you've got a boat, you need a pier above it if you're going to have shore access to your boat, and either a gangway or a ladder to get you from the pier to the boat or to the floating dock to which you tie your boat.
The RITA C was tied to a finger dock bolted to the main dock, and at low tide, sat about 15 feet below the pier, which is where the bait cooler was. Now, Boston-based lobsterboats often have an open stern- that is, the deck drops off into the water without a raised transom... here's an example- 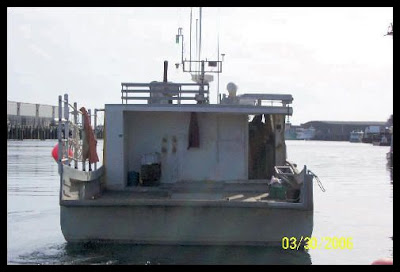 The Rita C was set up such that her deck level was almost exactly flush with the main dock that we tied to... essentially, it was no problem to drag something like bait right from the dock to the main deck, once the bait was at dock-level, anyhow.


The super-sized pickle barrels presented us with a challenge... they were another 100-150lbs in weight. And the salmon oil that slopped all over everything the day before was intensely slippery. Cocking a barrel to roll it somewhere was problematic- there wasn't enough friction to make the barrel roll... we mostly turned it in place. So, with all the grease everywhere, we hugged and lugged the barrels over the edge of the pier and down to the dock, down the deck of the Rita C, and up onto the engine cover, where the baiting area was.
When we were done, we were filthy and gasping for air. The day hadn't even really begin yet.

Remember the stink I talked about? This morning brought about a new dimension to the smell. Down deep in the barrel, where the weight of the mess of oil and salmon skins compressed everything, little pockets of decomposition were working away, creating gas bubbles filled with assorted degradation products. Circle of life and all that. The bacteria were working away, until they themselves died... then, other bacteria that like sulfur products and enjoy an oxygen-free metabolism started taking over... making more gas.

You might see where this was going. All the jostling around released little burps of hideous gas from the barrels. The smell of anoxic bacteria going to town triggers the human gag reflex- it's ingrained in our brains as part of our instinctual survival mechanisms... so I was gagging and salivating like a mad bastard as I stood over these barrels of death, afraid to begin the next step.

I am hideously allergic to fish oil. Strange, huh? The lightest touch of fish oil on my bare hands makes the skin fall right off them in massive sheets, leaving behind red raw hamburger... I've been spending my days on fishing boats since the age of seven. Obviously I'm insane.
I wear gloves when I'm going to be working on the water. I favor heavy rubber gloves with a long gauntlet that runs at least 1/2 way up my forearm... for protection.
With my gloves on, I dig into the first barrel, slopping a softball-sized fistful of skins into a bait bag. I have 40 more bait bags to fill.
There's a reason why sternman on lobsterboats are also called the 'master baiter." I could fill 40 bags with 2-3lbs of bait each in 5 minutes. Anything slower, and I would have to face the shame of stopping the operation while we were pulling traps so that I could bait up some bags. This is not cool. So I bait fast.
And, as I fill bags, the level of bait in the barrel starts to drop. I have to dig deeper, get my arms in there. By the end, my head and one shoulder are in the barrel under normal circumstances.
...but these are not normal circumstances. The smell is changing... evolving into something that was probably exactly what Yeats was talking about when he referred to the "rough beast, slouching towards Bethlehem, waiting to be born."
I am now dry heaving, filling the bags. At this point, we have left the dock, and are heading upriver.
One more dry heave, and I have had enough. I crawl over and through the bait barrels to the fresh air of the deck.

I bait a few more bags. I dislodge a bubble as I dig out more salmon skins, and it pops audibly, spraying my face with a couple of drops in a fine mist. I promptly vomit into my mouth a little, and head for the deck again.
"No! Dude! Fuck this!"
"Paul! Come on, man! We got no choice!"

By now we're far up the Weymouth Back river, a small estuary south of Boston, and at the end of the street I grew up on. In the early summer, I can see the buoys of our first traps from the dock. In winter, the closest gear is 10-12 miles away, in the open water.


The deck is slippery all around the bait barrels. Dripping oil, blood and other unsavory juices (called 'gurry' by us) have created a slick so potently viscous that I have to hose off the deck of the baiting area in order to be able to safely walk out onto the working deck.
Turns out, this just spreads the oil a little.

We begin our usual ballet of retrieving the buoy at one end of a trawl. 25 traps are roped together, 15 fathoms apart. Both of us quickly work at picking spider crabs (large, slow, inedible crabs, resembling foot-long spiders) out of the pots. Gorgeous hard-shell lobsters occasionally show up, but this is July, the summer doldrums, when lobsters are scarce. The B.O.B. empties the old bait bags over the side as we go, attracting seagulls. The empty bags get tossed in a box to be filled with bait after all 25 traps are aboard.
As we work, one of us hangs the bag of salmon skins in the trap just before it is closed and stacked on deck. Mud, water, crabs, old bait and gurry flies. Periodically, lobsters do too... undersized lobsters are tossed over the side- keeper sized lobsters make a pleasant 'clunk' as they're dropped lightly into a plastic box. This time of year there aren't too many clunks. Maybe 8 or 9 in this trawl, which is OK for this time of year, and better than much of the gear elsewhere.
I slip and fall, or slip and catch myself a couple of times. The deck is getting slippery. About 15 minutes go by, and we've got all 25 traps stacked on deck neatly. I retreat to the bait area and band the claws of our keeper lobsters, dropping them in the holding tanks. I then begin gagging and baiting again.
Something strange is happening... the seagulls are loud as hell, and there's way more of them than normal. They're agitated, too.
The salmon oil is leaving a little slick in the water that disperses after a few moments, but for now, we're leaving a sheen, and it's got the birds all excited. The B.O.B. swings the Rita C around and throws the end buoy in the water, letting the line extend behind the boat. When he's where he wants to be, he throws the last trap (or pot, as we call them) in the water and idles downriver.
Gravity and friction do the rest. The drag of the pot in the water pulls the next trap off the stack, and so on, until all 25 are in the water. There are now at least 100 gulls circling the area where the traps are... virtually none follow us. The bags of salmon skins are leaching oil into the water, leaving a sheen on the surface that is irresistable to the confused birds, who are apparently awaiting a feast that will never rise to the surface.
We marvel at the sight, and enjoy the birdshit-free moment, laughing at the squawks of delight and impatience behind us. I am rebaiting the bags quickly, slinging gurry everywhere- on the overhead, the side windows, etc... and on my face again. This one I can't hold in. I vomit up a mouthful of coffee on the deck. The taste in my mouth is far more pleasant than the smell of the bait.
...this continues for 8 more hours. By the end of the day, 3 of the barrels are empty. The deck is a nightmare, it's so slippery. I walk with one hand on the rail, or with my arms extended like a tightrope walker when I'm without a handhold. I've fallen 30 or 40 times, and I'm starting to bruise from it. The B.O.B is slipping like there are banana peels on the deck under the helm station.
... at the end of the day, we hose off the RITA C. We're a few miles from the dock, which gives us time to clean the boat as we steam home. I upend a LOT of dishwashing soap on deck to cut the grease... it sort of works. I only fall once or twice. When everything's soaped, I tell Bob, and he accelerates, giving me the pressure on the hose that I need to wash everything overboard.

We got to the dock shortly thereafter. I remember very distinctly slippping and falling as I walk off the boat. It is too much, one fall too many.


As we sit on the pier, having our after work beer (or three):
"I don't know what the hell we're gonna do if this stuff chases the lobsters away, Paul."
" Yeah, well, I'm more afraid that it WILL fish, and we'll have to do this again... If this shit catches lobster, I fuckin' quit."