While I was at home last time, the Fam got a new car.

I think this says it all regarding my attitude towards parting with money: 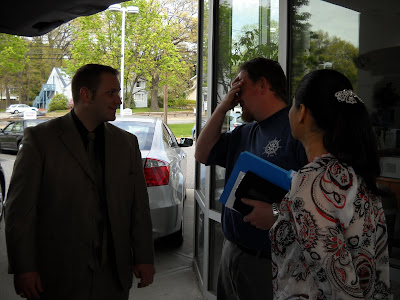 Anyways, it's pretty much my wife's car, although she's traditional in that you'll never see her driving it when we're together. She refuses to answer me when I ask if that's because she comes from a more traditionally patriarchal culture, or because I tend to wail in abject fear when I'm the passenger in her car.

I joke, sort of. I don't wail. I just squirm uncomfortably and sweat heavily.

Last week marks the first foreign car I've ever bought. When asked, my rationale was that I don't feel like being part of the reason why another family in the Midwest has to cancel Christmas this year... but that sort of rhetoric only goes so far nowadays that virtually all car companies are completely globalized. Anyhow, Inappropriately Hot Foreign Wife now has a new set of wheels, and yours truly is driving his first Family Car around town. Yes, folks, I own a mom-mobile. She chose the red color, maybe to better match the color of my face and eyes.
Ah well. She's happy, anyhow. 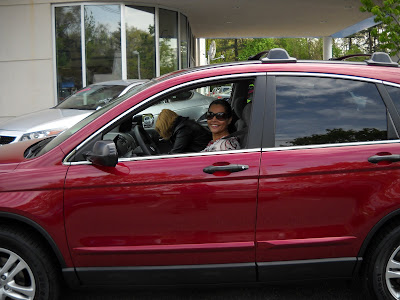 The dealership we bought the car from was actually the second one we visited. When we settled on the model we wanted, the price was a LOT more steep than I liked just for the base model, but we went there specifically on a day when I wasn't in a position to buy a car, having just given a couple of grand to the Eye Arrrrgh Ess. We proceeded to get The Hard Sell, you know, when the auto dealership tries to sell you a car by jamming it up your ass. We were paraded, serenaded and gang-banged by a team of greasy, jowly ass-slappers... pretty much like you'd imagine.
Rather than run screaming, I just dealt with it, and got the info I wanted, then we ran like hell out of there, and a few days later we went to another dealership that didn't try to lure us in butt-first.
Anyhow, short version is that I got a better model with way more options for less than the first dealership offered for their base model. The finance girl was Brazilian, as it turned out, so she and my wife rattled away in their language for a while, saving us a couple of grand in the process, so everyone went home happy. No hard sell.
I'm not enough of a prick to make a scene 100% of the time when I'm being talked down to. I tend to vote with my feet and my wallet. I realize that the folks who sold me a car made some money in the process. That's the way it's supposed to be. I wasn't about to kneel down and take it in the seat, however. I wanted to be treated like a human, to be given the basic respect that one gives a man who is about to spend a lot of money at his own discretion. When I found the right people to sell me a car, I bought the car.
Posted by Paul, Dammit! at 7:37 AM