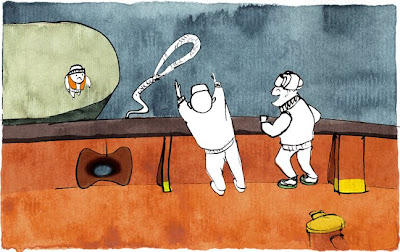 Bowsprite hit this one out of the park. For a moment there, last night, I was living someone else's vision, and that vision was darkly hilarious.

If you're a mariner in the northeast, and you poke around on teh interwebz, you'll come across Bowsprite or someone's reference to Bowsprite. There are only so many artists who focus on the maritime world here in the industrialized portion of the northeast, and Bowsprite works in watercolors, which I have a particular fondness for.

Now, I've seen this drawing for a few days, but late, late last ni... well, early this morning, I guess, when we were casting off from alongside a rusting Russian reefer ship, the fuckers dumped my bowline in the drink.

For my friends at home (hi Ma! sorry about the f-bomb), when we mate up a bunker barge and a ship, the hawsers preferably run in a predictable pattern. On the bow, a bowline runs from the outboard side of the bunker barge to a point well forward on the ship. This prevents the barge from sliding aft AND keeps the bow snug against the hull of the ship. Same thing on the stern.

When the job is done, and it's time to move on, the deckhands on the ship cast off out hawsers one at a time, and, for the most part, throw the eye (the end of the hawser) onto the deck of the barge. This prevents the bargemen from having to drag a heavy wet, and often cold rope out of the water, and is the polite custom. The thing is, for the most part, people don't just drop your hawsers in the water, but, for some reason, many foreign ships take great pleasure in throwing off the bowline into the water. This is shitty for several reasons- one, it is often the last line connecting the barge to the ship, and therefore should be removed only with the captain of the tug's say-so. Second, a polite sailor will wait for the tug to push the barge under the chock on the ship, so the upwards-to-half-a-cable (anywhere up to 300 feet, in theory) of heavy-ass hawser can be taken up slowly on board without too much fuss, and then the eye can be thrown on deck, waves and wishes for a safe voyage passed, and life goes on.

OR, the deckhand rushes forward and flings the eye in the water, and there is now a couple of hundred feet of hawser to pull out of the water before it drifts under the barge. This results in scrambling and cursing and wet, numb hands and legs, and maybe I give someone the finger, and that's not nice at all.

Anyhow, Bowsprite has captured that dismay forever, and everyone is cracking up when they come aboard and I show it to them.
Posted by Paul, Dammit! at 7:56 PM