all that and more

The world's a mess, the pope is a pussy who is channeling Evita, and I'm disheartened by everything I read lately. Don't cry for me, Argentina. The wolves cut the throat of a French priest today, and the fucking pope feels bad for the killers.

Other than that, things are great.

A whistleblowing captain on one of the larger us shipping lines got a $1 million award in a suit the other day, and well-deserved, for having gotten fired after reporting continuous safety deficiencies on board his ship.

Guy's blackballed, obviously, and $1,000,000 is a little on the low side, but that was the maximum the judge could impose, so he did, and that's good to hear. You can read the story here:


Again, this makes me happy about where I am. I view additional safety measures with all the enthusiasm that I view prostate exams and dental cleanings, but that doesn't make me less inclined to follow them, with the exception of the use of some forms of extraneous PPE which are onerous and offer no safety benefits except being a dog whistle in transferring blame for accidents from management to operations. But, even though I don't like prostate exams or dental visits, I do them because I have to and because they make sense, mostly. News like the suit above makes me glad that I have something to complain about. At least my employer gets on safety issues like white on rice, especially material ones.
*************************

In other news, what happened to the National Hurricane Center's prediction about this year being a nightmare of hurricane after hurricane?   It's been downright placid thus far, and for that I'm VERY thankful, but it sure as shit makes me question who the hell they pay to make these predictions.
Maybe it was Miss Cleo, RIP.

Obligatory- if they can't predict storms that happen EVERY FUCKING YEAR, I'm not going to entrust them to predict the weather in the next century, either. That's just a front for institutional racism by the people who gave us eugenics, anyhow. Lord knows no one wants the source of cheap global labor and unskilled work to compete with their lords and masters... you know, for their own good.

Well, laughter being the best medicine, I do like to laugh. I enjoy humor based on word play, especially. Although I'm not as articulate in the scientific language as I once was- minds, like machines, rust when idle, I still pride myself in being able to use language as both sword and shield, and that applies to humor like this: 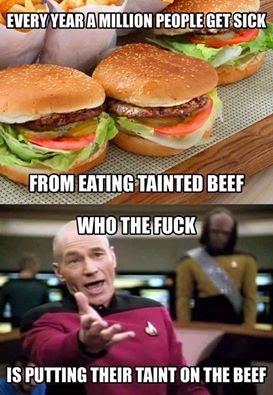 So I'll leave you with that fine imagery. Bon Appetit!
Posted by Paul, Dammit! at 12:24 PM

And now there's two tropical waves wandering this way Paul. This is why we don't have nice things