Well, I made my first round-trip voyage up the Hudson river for the year.

Ice-out is already happening. The icepack that choked traffic on the river and threatened to make heating oil scarce for the good folks of the Poconos region is breaking up and heading to sea after a couple of days of above-freezing weather.

It's pretty, anyhow, but noisy. Sailing over growlers and pack ice isn't terrible- there's a white-noise sound, and up on our bow there's some vibration and rumbling. When the icepack is breaking up, there are sections of clear water, and then the odd 20-foot by 20-foot chunks of ice that are two feet thick, and you know when you hit one of those bad boys. It sounds like a shotgun going off the next street over, then the vibration hits, then the resonance vibration, as the shock waves run through the hull and make the dishes and plates in the galley clatter- once when the shock wave hits, then about a second later when the shockwave bounces back to the bow and reflects back a second time to the house on the stern it happens again, a little more mildly.

Also, every now and again we hit one of those chunks square, run it down, and it just scrapes the whole way down the hull, like riding over a tall hump in your car, where you look in the rearview and pray like hell that you don't see the fuel tank in the road. Those are the ones that you feel through your feet and make the 'ooooh face. ' 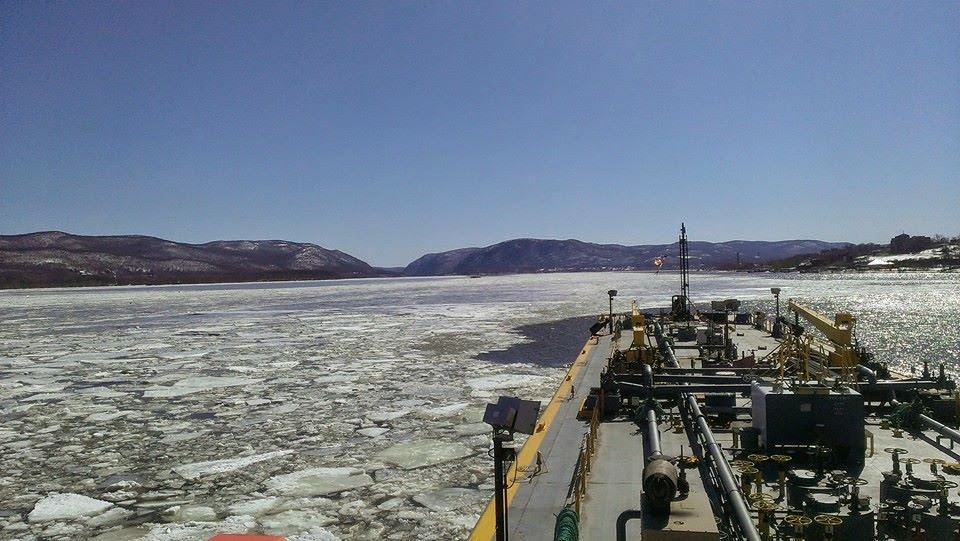 How often have you seen ice like that ? I'm sure you saw the bergs washing up on the cape. They were saying its once in a generation that you might see that. I do remember some huge ice floes back in the 70s. They were washed up and piled up in Beverly harbor and you could walk out on them. They were huge, at least to us at the time.

Yup, I walked out to a channel marker when I was like 5, and tried to steal the battery, so, looking back, that was a good 1/4 mile walk.

That 20x20 chunk of ice weighs about 40,000 pounds and if it is coming down stream when you are going upstream.
No wonder there is lots of noise.

Got to remember to watch the cooling water strainers too, that crumbly ice likes to collect in them.
You don't have to but the tug does.

There definitely has been a lot of ice in the Hudson this winter, and some of those chunks are far from small !
Quite aside from the potential for making one's hull rather more water permeable ( how's that for a euphemism ! ), aren't you concerned about the ice banging into your props, gouging the blades, or even losing one ?