That Charlie Darwin Guy Was Really On To Something


The most ridiculous part is that this is not even a rare occurrence. The real ballbuster of it all is that the guy at the helm of the speedbump sailboat was a Lieutenant in the British Royal Navy, and goddamn, he should have known better.

Labor Day weekend last year I had the same thing happen to me, except that there wasn't even the excuse of being underway. A sailboat ran right under my bow and got wedged there while I was AT ANCHOR. I guess they do teach the Queen's Officers enough not to have that happen.

Sailboaters get very excited about racing, I guess. Excited enough to do dumb-ass shit like this, and endanger themselves where the best-possible-outcome is getting a piece of varnished plywood with a chromed tin cup screwed on it, worth maybe Ten, Ten Fiddy at best. Or maybe I just don't get it.

5 years ago I was running a very underpowered 1000 ton boat into Newport RI. Light breezes, beautiful afternoon, but still a high pucker factor because the boat was taking up much of the channel

Well, it was a sailing yacht race week, and it was all antique multimillion dollar rich people sailboats this time. No shit, with guys in these gay little sailor suit uniforms and women in yellow sundresses with parasols and these gender-neutral shitty hats, too. WASP COSPLAY!  Seriously, made me want to call Dr. Kevorkian's self service line.
Well, I've got 99 senior citizens who plunked down 10K each for a 6-day luxury cruise of New England, and it's lunchtime. The sailboats are crossing the channel, and one of them has decreasing range/constant bearing.

RULE OF THUMB: When assessing risk of collision in a crossing situation, line the other vessel up with a notable piece of structure on your own vessel- in my case it was a window casing. If the vessel is moving closer but doesn't come out of alignment with the structure, it is on a collision course. This is the fast and dirty rule of Decreasing Range/Constant Bearing.

Well, shit. I call on the radio. I can't turn in this channel without a couple of minutes to get to a stop and some twin-screwing with bow thruster-assist, so I call the guy to let him know I'm constrained by draft and really don't want to do anything. I'm the stand-on vessel, meaning my obligation at the moment was to not do anything. I call on the VHF, nothing. I use the horn to make a passing agreement in a legal manner. Nothing. Fuck. Decreasing range, constant bearing. I blow the Oh Shit code (5 short blasts on the obnoxious horn). Nothing.  I throttle down and put the engines in reverse gently. 3 blasts on the horn. ("I am operating astern propulsion"). Then not so gently. The boat is shaking like a drunk with the DT's. Din-dins is definitely disturbed. I am leaning on the horn and take the wheel from the helmsman (a courtesy in case there is an injury- he's got a clean conscience).
Well, this beautiful shiny little mini cruise ship is underpowered, as I said. She's taking a while to stop.  The sailboat, never altering course, goes UNDER MY BOW, and the lookout tells me his stern passed within 3 feet of my bow. Had we touched, I would have been responsible- granted, he would have been fucked both physically and legally, but in a maritime collision there's no such thing as an innocent party. Everyone's getting some blame.
Anyhow, all is well. I apparently had the Creme Brulee waving like we were driving over cobblestones, but everyone but me is happy. I still remember that boat's name, and every time I go to Newport, I look for it. If I see it, I may just take a shit down one of his skylights.


BTB, Watching that video, I keep thinking of the captain of that tanker like Rodney Dangerfield in "Caddyshack."   "Hey, you scratched my anchor!" 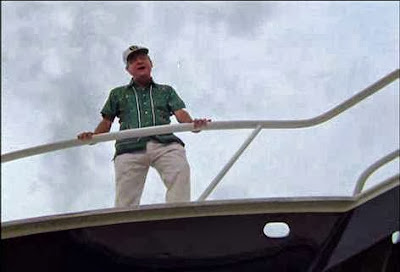 Maybe it is time for vessels to start carrying dazzlers lasers. Those will get the targets attention when they are too busy to listen to 16.

Those things scare me! I got lit up last year passing through Providence RI by an ordinary laser (I think) pointer. Completely night blind.

WTF was he thinking? Even though the Tanker was to leeward of the sailboat and "hiding behind his sails" there is no way the captain of the sailboat could have not seen the tanker. Based on the Video it looks like he realized at the last minute he wasn't going to make it so he tred to headup ( notice the jib luffing ) to clear the bow, and as a result killed all his forward speed. Then the rigging snagged the anchor and dismasted him the hard way.

That was pretty funny. Glad no one was hurt. The guy at the helm of the sailboat clearly was an idiot, but you have to wonder too about race organizers who set up a course across a safety fairway.