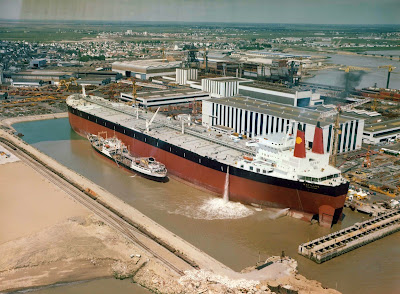 Here's a similar-sized ship when fully loaded- much harder to see that it's 4 football fields long when it's sitting 60 feet deeper in the water. 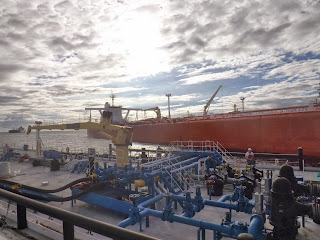 These are the ships you DON'T see. They spend most of their service lives never touching a dock or traveling within sight of the public. In a 6 month voyage, the crew often is brought aboard via helicopter or an overnight trip in a fast supply boat. Most voyages are spent moving from Single Point Moorings (SPM)- a giant floating buoy at the end of a subsea pipeline. Once every 5 years or so they travel to a few select places in the world for an inspection and a fresh coat of paint.They're so large that they'll grow by a few inches between sunrise and sunset as the steel expands in the heat. Some of these ships supposedly have bicycle paths to quickly get around on deck. 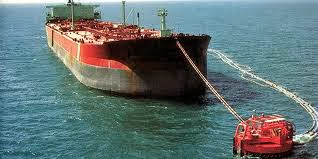 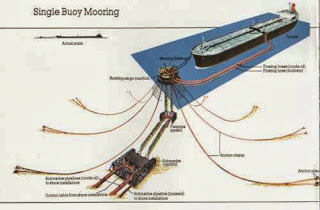 Ships like this only get within about 120 miles of the US coast off of Texas- there's just no place deep enough to bring them closer, so the oil companies build offshore installations to load and discharge these things.

Oh, my little tanker in the foreground carries exactly 1.1% of the capacity of the ship in the background. We're about the size of a large office building on it's side. The orange tanker is larger than the Empire State Building. Many have lap pools and Karaoke rooms for the crew (It's a Filipino thing, and the Filipinos make up 25% of the world's seafarers).

"No man will be a sailor who has contrivance enough to get himself into a jail; for being in a ship is being in a jail, with the chance of being drowned besides... a man in a jail has more room, better food, and commonly better company."

We were downbound in the Soo locks while the Indiana Harbor was upbound and empty. There was nothing but a wall of steel to look at as it went by and it is only two thirds the size of one of those VLCC's.
http://www.boatnerd.com/pictures/fleet/indianaharbor.htm

For your non-seafaring readers, how many people are required to run such a behemoth? 1276

That's part of the economy- crew costs are the same as a smaller ship.