Ugh. I don't even have the energy to flush this out fully... I have a friend who is a conspiracy theorist. Nothing, but nothing is what it seems. It makes me wonder, really, about what's going on in his head, where he finds than anyone with a little knowledge and power is out to lie and manipulate and do terrible things for unclear reasons that don't involve sex or money, which we all know is the reason everyone does anything at all.

Anyhow, the latest one is that this comet that is approaching the inner solar system is going to hit earth or come close enough to do damage, and the Trilateral And Space Administation and the illuminatedBilderburgs or somebody is hiding this information from us. He had charts.Two of them, in fact. Only one of which showed the comet, which was coming right for us.

Only thing, it's a polar projection... you know, top looking down where the center is the pole and all meridians are strai... you know what, never mind. It's set up like a chart for plotting an ocean passage- a Great Circle route. Here, in fact, it is. 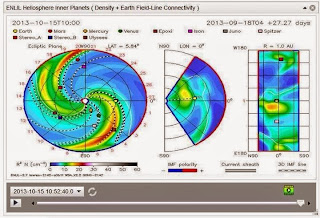 OK, it actually does look like the comet is coming for us... except that this chart doesn't measure that. It's not that kind of chart. Plus, the comet is not coplanar with the platetary orbits- it's coming in high and dropping in on the Plane of the Ecliptic (think of the tabletop on which your solar system model sits- it's the plane in space where the planets more or less are aligned on.

Well, turns out, IF the comet survives its' pass around the sun, which is a maybe, it MIGHT pass about .5au from us- about half the distance between us and the sun. Not exactly close. 4 light minutes, say. Anyhow I gently put it to him that this wasn't a conspiracy, and in return I got some chinese radar image that purported to say the same thing... and I can't do this anymore. It's like dealing with a flat-earth believer, so I just sent this: 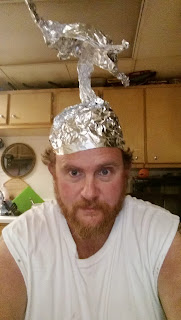 Not only can I keep teh gummint from reading my brain waves and stealing my sperms, I also get NBC on demand.