I've sat in on half a dozen conversations with peers and elders on Rogue Waves over the years. Many mariners believe they have encountered one. Of these people, many have not.

If you're a science nerd like me, you'd care more about the Gaussian wave prediction model, which any watch officer knows as the wave height prediction chart.To really get into this, you have to get into physics on a practical level, which is beyond the need of most mariners except as a curiosity (see 'nerd').

So, a significant wave height is calculated by taking the highest 1/3 of waves in a recorded set, and taking the mean value (not the average!) of those waves.

A rogue wave is a wave more than twice the height of the significant wave height.

Read the infogalactic entry. It's a neat subject.  There has been a school of thought that rogue waves don't exist. They are transitory in nature, thought to last only a few minutes or less, but they can be devastating. In Force 12 (e.g 'really awful') conditions, a rogue wave can present  a 15-20 fold increase in pressure on a hull form over surrounding waves that already approach the maximum strength of most ship's hulls. In other words, imagine you are curling a 50-lb dumbell, about 80% of your maximum for a single arm. Suddenly there is a 750lb weight added to the dumbbell.

That's what a rogue wave can do. 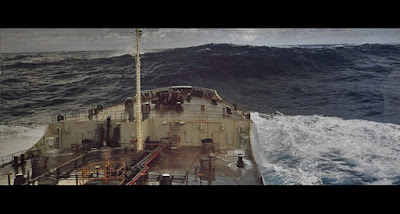 That was in very mild seas. It still buried the bow of the ship. This picture can be found online. At the time, it represented the strongest photographic evidence that rogue waves were real. The cool thing is that I first saw it in the captain's office on a ship I was on. IIRC The picture was taken by a friend of his when they were both chief mates on two different ships.
So that gorilla of a wave came from 5-8 foot seas. Imagine what a 35-foot sea can produce...

Now, continuing with a little geekdom, Rogue waves are also referred to as Draupner waves, because that was the name of the oil rig where the first one was recorded using scientific-grade instruments.
The rig was dealing with 36-foot seas, which is a real shit show. Then an 84-foot wave struck from out of nowhere.

So, this is pretty cool: Given that there used to be a reasonable doubt whether or not these things existed until 1995,  and that modern telemetry has since recorded several more, we still don't know much about them. Why they form, when, etc.  BUT, a group of scientists have created rogue waves in a laboratory setting for the first time.

The data so far has been fascinating.

Now, story time. I am NOT sure whether or not I have ever been through a rogue wave. There are other phenomena that can wrack a ship or cause a sudden loss of stability. Ships getting into a rolling period coincidental with the wave period, freak waves (which can by caused by wind, gravity, seafloor upwelling, whatever, it's a handy general descriptor.

Now, I HAVE been through Head Sea Parametric Rolling, twice, in fact. I was an Able Seaman on the tanker 'The Monseigneur' in 25-30 foot head seas passing north well offshore on the West Coast. We were pitching heavily and rolling 15-20 degrees running at reduced speed. Pretty uncomfortable but doable. Twice in 30 minutes, we pitched up rapidly and snap rolled to 50+ degrees out of nowhere. Shit flying everywhere. I was on the bridge on watch. The roll was far faster than the normal roll of the ship.  Now, years later, I recognize that we were in a head sea parametric roll. Essentially, the bow came down off the back of a wave, and wave behind it was EXACTLY the same distance from the wave next to it as the ship was long. So the bow came down off a wave, the stern came up on the one behind it, and by chance, as it washed away, the stern fell off the wave on one side, and without water there, fell, snap rolling.
So that sucked, but it wasn't a rogue wave.
Now, Hurricane Ike, it is far more likely that I WAS hit by one, but I'm still not sure. I've written about what a nightmare that was, it being the only time I have actually prayed to God and made a legitimate Act of Contrition under fear of death. It makes a certain amount of sense that we did encounter a rogue wave. A large hurricane, 35-45 foot seas, and cross-seas almost equal to the primary storm waves, and after 3 days of getting dragged backwards we got knocked down, rather than fell into a hole. The captain estimated that we were hit by a 70-80 foot sea, almost directly broad on the beam, but it being 2-3 AM, we couldn't see much. It sucked, either way.

Something like Lake Superior's "three sisters", had to prove they exist, but when you are out there every now and then you get wave(s) that make you say "where did that come from".
Those types of waves are not always three in a row and are not always there.

As for the rogue waves, several times they have been found and satellite tracked in the area between Madagascar and the southern point of South Africa and I believe in the north atlantic too.

Spent 3 hours last night on a wiki safari on rogue waves because of this.