So, as you might know, I'm a huge fan of picanha, the staple meat in Brazilian barbecue, Chorrasco.

If you've gone to a Brazilian restaurant, you've probably had picanha (pee-kahn-ya). It comes from the sirloin cut, but a cut generally not found in the US, the sirloin cap. Generally, it's just easier to buy a picanha at a Brazilian grocery store. They're not expensive, $25-30 for the whole cut, which will easily feed a half-dozen people or three dedicated fatasses like me. 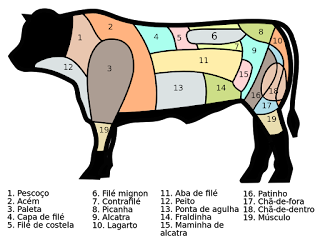 If you look at the picture, the picanha comes from the top of the cow's hip. This is NOT a famously tender cut... but it can be.

First, the cut. Picanha comes in a 3-cornered cut, like tri-tip, with one half of the cut thicker than the other, and a cap of fat, that you need to keep. A full picanha is about a foot across. Do not trim the fat. You need to cut perpendicular to the striations in the meat. cross-cut to the grain, in other words. Generally, Brazilians refer to finger widths as the unit of measurement. I like a 2-finger cut to make a medium-rare steak for myself. My wife and kid like a 1-finger cut, to get medium to medium well. This will leave steaks from steak tip sized to about 8-oz with a big rind of fat on one side. 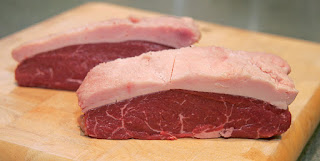 Salt. You need large-grained salt, at least 1/8" coarse crystals if you can.  30-60 minutes before cooking, you sprinkle the salt liberally on both sides. The cru (coarse) salt will tenderize the meat wonderfully. Fine-cut salt, like table salt, will penetrate the meat without tenderizing it much, and your meat will be horribly over salted.

Once your meat has been tenderized, you throw it on the grill at high temperature and close the grill up. Check it every few minutes, until the fat catches fire, and it will.
Note: these instructions are for a gas grill. Charcoal or wood fire, you just cook it like any other steak.

The fat fire caused by burning picanha fat is where the cooking gets done. When the fat catches fire, you will probably want to shut off the gas and start shifting the not-on-fire steaks into the neighborhood of the fire. Turn the steaks as needed, and don't overcook them. The VERY hot fat fire will cook a steak to medium in just 2-3 minutes per side. When done, the picanha will have a smallish to medium-sized fat rind... which is incredibly delicious.

It literally is... take a cow and add fire.  And when done right, it is as tender as prime rib and more flavorful. 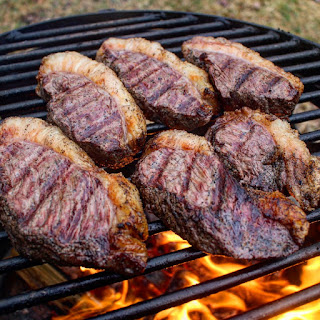 Gotta see if my redneck butcher can manage that cut.