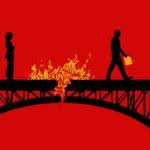 Sometimes, burning bridges is the best thing you can do. Eliminate your lines of retreat and reduce your chances of missing something ahead by eliminating the desire to look behind.


Without being overly cryptic, I recently closed the door on some people from my past who used to be friends. Rather than continue to be annoyed by them and saddened that we'd grown apart over minutia, or politics, or lifestyle, religion or all of the above, it made more sense to just not worry about it anymore. I like things simple anyhow.

I figure if someone gets so upset that my personal politics, or my faith, or their lifestyle choices become so difficult to accept that they can't be a friend, they certainly aren't and haven't been for a while. So it goes.

One of the most helpful things that happened this past fall in dealing with my mother's death was that when I would return to my old hometown up north, a few friends immediately stopped  what they were doing and rallied to check in on me, visit with my mom, say goodbye, that sort of thing. I didn't even realize that I needed any emotional support until I had it. Some of those folks I hadn't seen much of in the past 10 years, but the distance and time turned out to be irrelevant, and I'm very grateful for that.

Other people who used to be in my life... well, different story. I think, upon reflection, that my career change, in going back to my roots and being a fisherman after college was done, was something of an admission of failure on my part. I failed to change as a person. Perhaps that was the impact of treating college and grad school like a job and not a social round. Being a scientist wasn't satisfying, just dull, as were most of the people. I aspired to enjoy their polite company more, though, thinking it a benchmark of what I would need to take part in in order to shake off my working-class roots.

Well... shit. After I realized I was pretty unhappy and changed my life to something I'd actually enjoy more, I tried to stay in touch, to be friendly. I just couldn't change my basic nature. I may do well in polite company, but truth is I'd rather be with impolite company and having a good time than sitting around being pleasant with people I don't have anything in common with except for a desire to not be thought stupid.

I remember one party at somebody's apartment in Cambridge, MA, maybe 2002. Friend of some friends. I had started the day with a mild hangover but had woken up at 4am anyhow, hauled lobster pots for 12 hours and gotten back to the dock at like 5:30pm. I drove home and showered, ate, and by the time I had driven the 40 minutes or so to Harvard Square, it was like 9pm. I had to be up at 4am the next day anyhow, but I was in my 20's. No big deal.
It was pretty dull, but pleasant enough, I suppose. I listened to a lot of talk.  After everyone had had a few drinks, some of the ladies who I knew made a few digs at me for being a caveman and foregoing the opportunities that my education provided. I explained once that I was happier with what I was doing- it was exciting, rewarding, and the higher-risk nature of the work was satisfying to the part of me that liked doing what others wouldn't want to do. I might as well have been talking to the wall to my associates. Nonetheless, as I am wont to do, a couple of sea stories got told, and a likely enough woman showed some interest in me and I didn't complain at all. Some upper class young ladies really do enjoy slumming it with someone who can be polite and inoffensive.
Thing is, it was all an act for me. I still wasn't enjoying it, and other than a desire to get laid, I was having one of those 'I don't want to be here' feelings. The most vocal of the women I knew at the party got fairly drunk, and let her mask slip a bit, turned pretty mean. She said some vaguely cutting and dismissive things in response to the last story I had told. Cock-blocking me, essentially. I was still housebroken enough at that time that I didn't really do much beyond pretend I didn't realize she was being shitty. I ended up getting the girl's number and by 11pm I was in my rotten bait truck headed back to the suburbs, but the night sat heavy with me. There was nothing truly wrong with them, the problem lay with me. I didn't belong, and never did, and never will.

The next morning, when the Notorious B.O.B. showed up at the dock, I had the engine warmed up, our 1,000 lbs of bait already loaded on board, filled up our fresh water barrel and was loaded up on caffeine. I had slept maybe 3 hours and was still somewhat annoyed with myself for being a drama queen and not just enjoying the company the night before. Over the course of the day, we talked about what was going on inside my head, and by the time we got back to the dock, Bob's dad had dropped a 24-pack of Heineken in the bait cooler, and we proceeded to drink at least half that suitcase. "Fuck 'em," was Bob's advice. "You got people. How many do you really need?"

Truly. I've never met you, but you're the type of person I like to hang around with. Smart, opinionated, argumentative, fun as all get out. We'd hate each other, laugh at each other, and know, 20 years down the line, we'd still be friends.

The prissy people and all the pretentious jerks that can't understand the concepts of debate and logic? Fugedaboutem.

My wife had to learn the hard way to stop worrying about all those other people, including, well, her family. After a really bad, bad time in the hospital, she looked at who came, who sent cards and who didn't even pay attention when she was at death's door. Good-bye, birth family. Good-bye, people at 'work.' Good-bye people who didn't give a rat's ass.

She's in a much better mental state not having to constantly worry about what everyone was thinking about.

You made some good points. I've been keeping in touch with a couple friends from high school and college, for nearly 30 years now. We have really nothing in common anymore; 2 years ago I stopped going out to supper with them when I do 2 trips to the city they all ended up living in for work each year. It was not fun. They were unpleasent, hate people who work in the oil patch and assume their views are supperior because they all are university profs or government beaurocrats.

You are such an asshole.

I've found the same thing. I am an old time cowboy at heart. I treat women, children and animals with respect and care. My wife noticed me when she was 14 because I was "different" than the rest of the guys at school (half gentleman - half caveman). We didn't connect until after graduation, but I was lucky to find her and marry her.

I attended church near Rice University in the 90's and the pretentious master's and phd candidates were tiring... I was always being warned about what I did or said to keep from offending their softness. I'm more of a doer than a bookie. I like to find out how to use what I know, not just revel in know it.

I'd much rather be who I am, I don't have to worry about forgetting who can handle what... It's like a self-sorting friendship sieve. If they can't deal with my old timey-ness, they don't hang with me for long.

I think that's why I like your blog so much. It's honest. And I get to see a side of the world I'd never be able to otherwise. From a man that I can respect for his truthfulness and obvious lack of social slavery.

Well, I try. And thank you.

... and yeah, I am an asshole. Took you long enough to figure it out, genius. Come back and have your opinion confirmed anytime, let me take up more room in your head rent-free.

I have one friend who's a University prof (my academic advisor, in fact) and another who's a government scientist. I hadn't seen them for years, and they showed up at my mom's wake. It made me so happy to see them, and I truly appreciated them coming. It also made me realized I painted with too broad a brush in this post. I do have friends from the college era, former colleagues and such, who I consider good friends... and those are very much the ones who last, the ones who know me but still manage to actually like me. In turning my back on the last of the people who are not among those, however,I would never walk away from true friends.

But I'd bet he's happy and doesn't leave rude posts on someone else's blog.