Well, first storm of the winter was pretty strong. We got 28 inches of snow on deck, drifts were twice that, and winds were pretty lusty. After 2 days, we're finally shoveled out, which means that our walkways are clear on the perimeter of the deck, and there are maze paths dug to all points of interest on deck; the places where we need to be to make-a da money are now accessible.
We've got a small cargo parcel (1600 tons of heavy fuel oil and 300 of diesel, so the hot oil (heavy fuel oil generally comes aboard at 120-140 degrees) will do some melting of the snow on deck. In a few days it should be must more hospitable.


New York is something of a mess, 2 days after the weather passed. I went ashore today to get grub for the next 2 weeks (tomorrow's the halfway point of this trip), and the city's employees are doing their best to make the roads more passable.

Interesting thing, though. Only city trucks do the snowplowing.  In the Boston area, contractors and anyone with a 1-ton 4wd pickup with a plow rig can get a contract to plow snow with their municipalities, on an on-call basis. In NYC it's the trash men who handle it. And there ain't enough of them to quickly handle the 2+ feet that they got.

New York is run by a communist cartel, pretty much, and as you might expect in a worker's paradise, there's a serious iron fist when it comes to state control of everything. I'm not talking about the trash trucks, either, but the fact that the city declared a travel ban on their streets during the storm. That doesn't sit well with me. Granted, it's best to keep idiots where they can't hurt themselves or others, and in a storm that means keeping them off the roads, but an order, enforced by police, absoutely rubbed me the wrong way. Well, I don't drive here, so I don't have a dog in this fight, anyhow, but during the blizzard portion of the storm, my watch partner and I were at a lay berth in Brooklyn in a good position to ride out the storm, so we went ashore and walked around for a while in the middle of the empty streets.

It was actually pretty nice. There were other folks doing the same thing, and everyone was smiling and waving, chatting for a minute with us before we passed on. Lots of parents dragging kids on sleds, right down the middle of roads where normally you take your life in your hands just crossing at a crosswalk correctly. 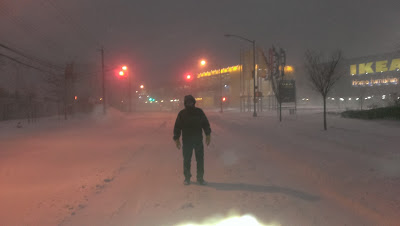 Well, yesterday dawned calm and with the sky that lovely winter blue color, and the shoveling aboard commenced.

Meanwhile, Inappropriately Hot Foreign Wife tells me that she had to bring her orchids inside at my house, because it almost got down to 60 degrees! Well, it's in the 70's today, so things are back to normal, anyhow and the orchids are back outside. 2 more weeks and I'll be there. I'm awful tired of shoes and long pants.