After the past few days, it was wonderful to settle down here in my own place and get caught up on maintenance, painting and the like. We're still in the process of switching the deck paint from storm gray to deck red (the better to hide the blood!), so getting out there to fling nonskid and roll out the acres of hot steel has been a good opportunity to put my head down and lose myself in some mindless labor. A mini-vacation.

In the meanwhile, we've been hosting visitors. I forget if I mentioned it, but a scene from the upcoming action movie 'Dead Man Down' was filmed aboard here, and Colin Farrell took his turns around HAWSEPIPER's afloat global HQ/ cinematic backdrop. Executives and functionaries working for the oil major who pulled a whoops on us and dumped sludge in our tanks also came to take a tour- killing two birds with one stone, in that they could see the scene where things went sideways and show some mid-level staff what a tank vessel looks like. They brought several lovely ladies with them, too, which was nice. Of course, everyone was more excited about our tomato plants than anything else. They've certainly been a nine days' wonder here on our steel beach in terms of novelty value, but I'm quickly coming to look forward to watering time, when I can do something a little out of routine in my day, so I can see their point. 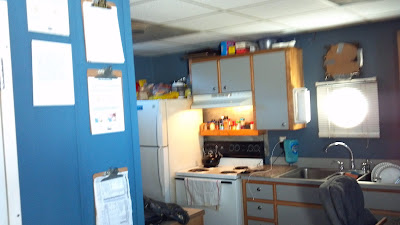 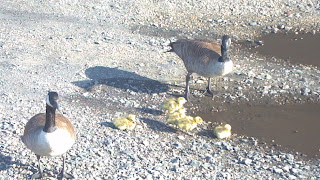 I never feed Canada's flying rats. Except this time. The chicks were nice, as was the obvious parental care. 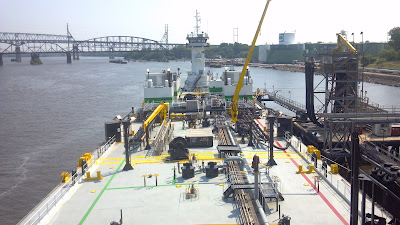 View from atop the mast of an ATB 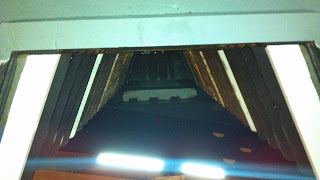 Looking down the barge coupling- the gear visible at the bottom is the tugboat's retractable coupling- by extending it out from the hull of the tug and turning it 90 degrees with the hydraulics, the tugboat becomes rigidly connected to the barge. 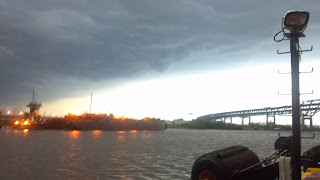 Watching a thundehead anvil up right over our heads was neat, as was the 30 seconds of warning we had when it was time to go inside and button up the house.

Other than that, I'm not quite recovered from my adventures last week, mentally, which means that getting out of here early next week is coming at a timely time.

Galley looks good Paul, I for one preferred nice colored living quarters on barges, instead of industrial white.