The things we say 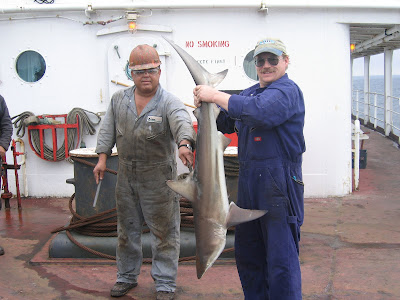 So, tonight, whilst I am...ah, under a slight influence of $280 worth of sushi and Scorpion bowls, one of those funny leetle truisms fell outa my mouth.

I was talking tonight with my sea-daddy Orlando, the guy who taught me how to do my job and how not to kil myself on the deck of my old ship. Orlando is working on my old ship whilst she is undergoing an unscheduled shipyard period to effect some necessary repairs. Tonight we talked whilst he was at a 4-star restaurant with much of the skeleton crew o' my ship. Sadly, my good friend and former shipmate Eldon J. passed on this week. That's Eldon on the left of the picture, and he was as fine a shipmate as any man could ask for- a good man to lead a discussion on religion, on married life, and on how to conduct oneself with honor on shore... and he made a ceviche out of Black-Tip reef shark that was to die for.

The remarkable thing about Eldon is the dpeth that the man had. I spent six years with him, and it's obvious that I was only touching upon the tip of the iceberg. Every now and again, at meals or during work. Eldon would pass on a bit of homespun wisdom or a bible verse appropriate to the situation when one of us would get antsy, or angry, or outraged, for that matter.

For my part, when we were tying up the ship or letting go the mooring lines, Eldon shushed or calmed me down on a few occasions when things didn't work as they normally did. Whether he spoke a few words in his singsong patois version of Honduran English, or spoke more directly in a formal tone, Eldon knew how to get the most out of an inexperienced officer, or conversely, how to calm an outraged or off-put sailor when the situation called for. Regarless, when Eldon was late or occupied during mooring operations, he was badly missed. I can't imagine what it's going to be like tying a ship up without him.
I think that mostly, I will miss my friend, but beyond that. my old ship will be greatly impoverished for his absence. In the end, for those of us who agree to sail on this particular ship, we agree to sail for the company alone- the money involved is not part of the equation.
Anyhow, when I spoke to Orlando tonight, I surprised myself. I said that so-and-so and so-and-so, and so-and-so were more than friends... that they were family, and I knew that they would feel the loss greatly, as would I. Orlando agreed, and we quietly said our words that will carry us to the next time we speak.


I miss my friend very much. More, I miss my shipmates strongly tonight. I have been happy in my decision to leave my ship, but now... I dunno.
Posted by Paul, Dammit! at 6:50 PM