even when I'm wrong, I still win.


Week The Second, Day One: Where our hero has an uncomfortable conversation with a deckhand


"Dude, you stick your whole head in the tank top when you're stripping out number four starboard."

"Yeah, well that russian guy on the other ship is taking pictures when you bend over to look in the cargo tanks."
"WHAT!"

Bang. Sounds distinctly like the gong from "The gong show" when I was a kid.
"Ow!" The back of my head shakes hands with the hatch cover that I've got my head stuck through. "Fuck me sideways!"

This scintillating conversation occurred two days ago when we were transferring fuel oil to a pretty little cargo ship. The russian chief engineer was warm for my form. He was a little dude covered in oil. I was a big dude covered in oil... who likes the ladies. So solly, Ivan. Nyet.

"Dude, there's a diesel engine 10 feet away from my head, I can't hear anything with earmuffs on, and my head is not all the way in the fucking tank... and no, I don't suffer from it. I enjoy it immensely. Teenagers pay good money for a tube of model airplane glue, and I have to hold my breath, or my kids will come out with flippers."

"Yah, sometimes. It kills brain cells, but the weak ones will die off first, anyhow. So if you don't breathe it in, why is your head so far in the tank?"

"My head is NOT in the fucking tank. Now let me strip this."

"Yeah, well, I'm not putting out. I like innies, not outies."

I swung my ass 90 degrees, so it pointed at the bow, distinctly away from the other ship. Apparently the chief engineer then left the railing and went inside.

"I wouldn't have guessed that he was into foreign man-ass."

"I said the same thing about your mom." 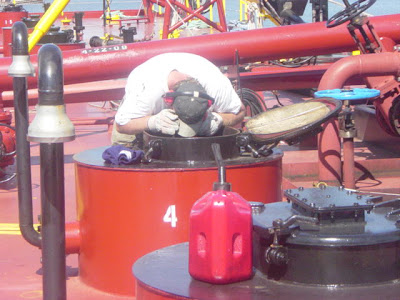 i think i hear a sit-com!