when the chickens come home to roost 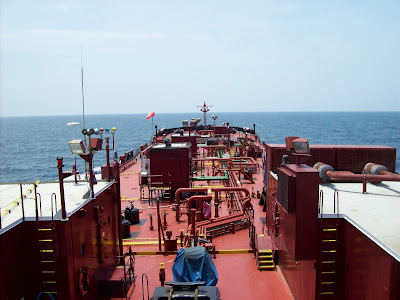 At home, this is called a "Baage." We eschew the letter "Ah." It's wicked queeah. 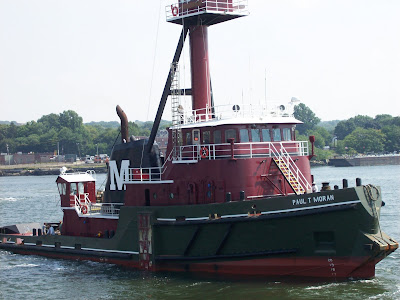 Baage+Tug (*coupling at bow)= ATB
Rumor is that we'll be lightering into the ATB (Articulated Tug/Barge) that I worked on this past summer. Should be interesting. Somehow or other I'm the onboard ATB expert. Personally, I think that 5 weeks isn't enough to master a whole class of vessels. My memories of the ATB are mostly limited to excellent food, sunburn, hot weather and catching fish... pretty much the average summer for yours truly 15 years ago as a college student, with the exception of the fat paycheck.
I am facetious, I suppose. I did learn a lot on the ATB, mostly limited to codifying the skill sets learned here on this tanker. My time as a fisherman prepared me to be an AB tankerman; a hard day on the tanker is easier than an easy day as a lobsterman. Thusly, being on a barge with no Inert Gas system and a bubble instead of a digital readout of pitch/trim made for a nice day relatively speaking. Being appreciated for a certain amount of raw ability helped, too.

Tomorrow, however, I have to explain why I buggered off the ATB. It wasn't 100% by choice. I just got tired of waiting to get called back to work! I can't sit still. I've got itchy feet.
Posted by Paul, Dammit! at 7:52 PM

Good post, your blog gives a good sense of what life is like in our maritime world.