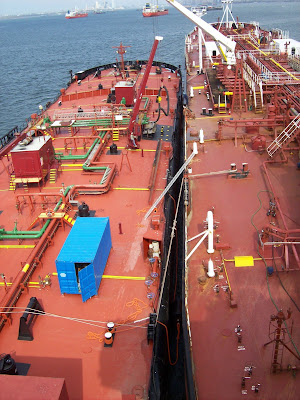 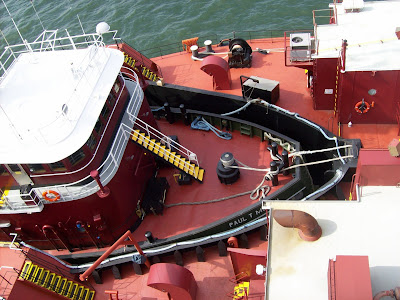 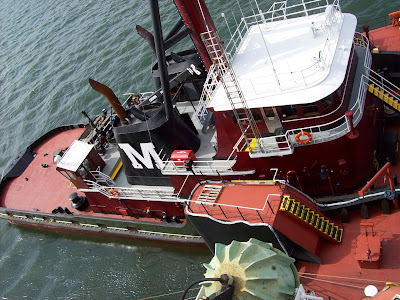 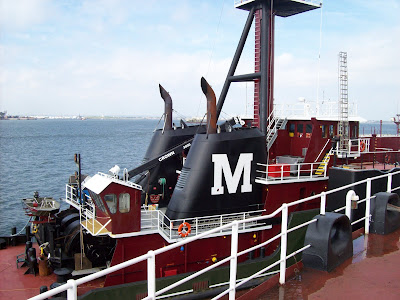 Here we are disconnecting from the barge Massachusetts, after delivering 111,000 barrels on board. As mentioned in the past post, I worked for 5 weeks on that barge, so I know her layout and the crew well. I had to zoom the hell out of my camera to tak this picture through a window... flash photography ain't so good for oil tankers. You can see here that much of the cargo deck area is freshly painted and rust free. Believe me, this is a drastic change from this time last year, when the ship looked pretty damn you-glee.

The Paul T. Moran is a big damn tug. You're looking at 60 feet of her in the barge's notch. It was great to catch up with my former co-workers.

Here's the rest of the tug, minus the upper wheelhouse, which wouldn't fit in the picture.


Side view. Still can't get the whole thing in one frame.


We did very well in our vetting yesterday. No obvious boo-boos, and some helpful-sounding suggestions were on the beef list, according to inside sources who were pretty scanty with the details. In addition, I saw the company's marine superintendent, a former chief mate I had worked with, and he didn't give me shit about my blog, which is a relief. I think that it finally sunk in at the home office that I wouldn't write anything that would a) shoot myself in the foot jobwise or b) make them look bad unfairly.

I am, in the end, all about making people look bad fairly, but mostly I do that with my own self more so than anyone else.


On a Far More Serious Note

Just under 1/2 of the unlicensed crew on board has asked me for the number for the HR department of the owners of the ATB we just lightered into. This I find depressing, if understandable. I am discouraging all but a couple of guys, and the only reason I'm doing this is because some of the guys here are passing through. If they don't want to stop here, I understand. It takes a certain type to tolerate the negatives here, regardless of the many good points of this ship and company.

Therefore, I am going to carry out an older threat and publish my first manifesto of the Autumn, entitled, "5 Things shipowners can do to improve crew retention without breaking the bank." Stay tuned.

What's up with guys going to HR lately? We've had a couple on the night shift get their panties in a bunch over the last week or so. Here's the best rule: Keep your head down and get to work. Period end of story.

i agree with anonymous... the paul t photos were great. if you have any to share, i'd love to. i do a blog called tugster. check it out. tugster.wordpress.com i'm based in nyc. i used to live in coastal nh, so can idnetify with the new england and specifically lobster science stuff. keep up the good work.

No matter what company you work for not everyone is going to be happy and that everybody is always looking for something else. Looking at the pics I know which ship youre on and have worked on her and all it's sisters in the past and understand what beefs people have with the company. A company is only is as good as you want it to be, being whether it is benefiting you or not. They all have their faults, whether it is bad pay or no advancement. With this particular company I think we can both agree that it is a place for better advancement. As for HR, when they get their employees from the union, theyre attitude towards it is "they'll find us replacement". Better incentives are always a plus but attitude of a vessel comes from the top down and the people that are there. I got to agree with Bill and to add to that, work hard, go home, play hard. Just a thought. Good pics and nice site. Thanks