One of the surprising upsides of moving to Florida was that I rediscovered that I like to make stuff.

After I got married, I quit lobstering, ended up moving a couple of towns away from the ocean too, to an apartment in an ugly suburb that had a large Brazilian population so my wife wouldn't be lonely. I was miserable there, never got over being away from the ocean. Every single day I was home I would either drive the 30 minutes to a beach or go to a bar. It helped. Thankfully we ended up moving to Florida, and everything changed.

A side effect of aging and living in a place I actually like has been that I gravitated towards making and fixing little things again. My little wooden model boats, fixing the cheap elderly vacuum cleaner that should have been thrown out during the Bush admin, making little doodads, things like that. It filled my days in a way that the bar never did, and the beach... well, I live in south FL. The beaches are awesome.  Along the way, I've made connections with buying quality wood, and my skills are improving. My hands... my hands are still not good.  Too much damage from when I was younger, and that limits my ability plenty. It's hard to make a straight cut when your hands shake from the effort of holding a skilsaw. Hard, not impossible, though. Before house-hunting took up my time, I was working on making nicer curves in wood and improving my raw ability- I can sand out errors as much as the next guy, but I spend a lot of time sanding. So I'd begun experimenting with joining curved cuts, where I couldn't rely on sanding off shitty work. My little drunken cutting boards have been a lot of fun to make. 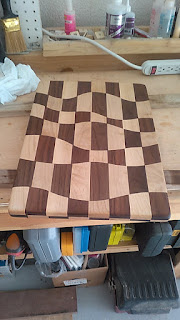 My new house has a 3-car garage that will become my new shop space. It's got about the same square footage as my old apartment when we first got married. I'm going to be upping my game. I think I can do better than making cutting boards now.  Starting with making a shop for me.

Then end goal? I'm going to build boats. I'll be turning 45 when I'm home next. I have drawn out 3 boat designs I want to make- a dory, a rowing shell, and a small sailboat. I learned the basics of lofting and drawing out boat plans in my 20's and never did much except dream about making them. This past winter I started relearning the skills I picked up when I still had patience, and hair, too. The designs are done, more or less.  All requiring 100+% of the abilities I have at the moment to be made well. I anticipate killing a lot of good wood in the process of upping my skill.

One thing at a time, though. I still need to finish my current model while I'm upping my skills. I have to build the shop space, bring in an electrician, make cabinetry, things like that. 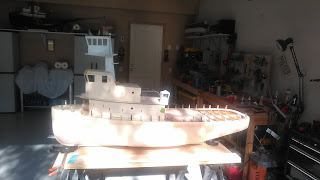 I think I took this picture like 6 months ago. I haven't done much since then. Some fairing of the house, and I roughed in the bulwarks, which need to be faired.

I have to move my existing shop when I get home next too. It'll be summer before I can make headway in the new shop, but on a rainy, shitty night like tonight, thoughts of making a space to make stuff help pass the hours.

There is something innate in us to make things. You are very skilled, no doubt. I sure hope making that shop and your boats goes well. I really enjoy making what I make. Usually things for around the house, although, I'm learning to machine metal. I really enjoy doing that kind of work.