Not a super auspicious start

Well, I'm at LaGuardia airport in New York, and like it always does on crew change, it's rainy and windy. I'm up to SIX flights in a row that have been delayed or cancelled on me. So far I'm only delayed an hour, though the three airports that serve NYC are the three worst airports in the US for delays, so I'm probably fucked. So it goes.

I'm searching for a zen moment here. It started off pretty good. My relief showed up at the same time as our tugboat to charioteer us to the next job, so I called a car service and bugged out. The road to the lay berth we were at this morning floods during rains, however, so I get to enjoy wet socks and pants for the 8 hours I had to wait for my flight- I never know what time I'll actually get relieved at, as it can take anywhere from 30 minutes to 4 hours for my relief to get to me from the company HQ, depending on my location and availability and accessibility of a ride by land or sea. So I usually get a late-afternoon flight, although my relief showed up 2 1/2 hours early to be sure I could get off at the relatively convenient lay berth in Brooklyn,  rather than at an oil terminal in New Jersey, our next stop.

So far so good, right? I happened to know my taxi driver pretty well, too, so I got to chat with the guy, catch up a bit which is nice. At the airport I got breakfast and changed to an earlier flight- 1pm instead of late afternoon, so I'd only be here for 5 hours instead of 8-9. But with the shitty weather my flight will back up as all flights to and from NY do when the weather isn't pristine, and in the end I'll have paid an arm a leg and half a nut for 2 hours more time at home.

Screw it, worth it. My late afternoon flight is already showing a 4 hour delay. So far I'm winning. I might get out of here just 2 hours late.

I'm not sure exactly why I have had such a bad run of luck when it comes to flying in and out of here. After 4 years of this, it's been unusually bad the last 6 months. Long as I get home, I'm moving in the right direction. 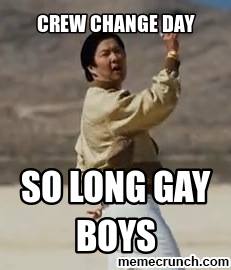 The best of luck to all of you through this!