Well, 24 hrs from now, I'll be in the air, headed back to HAWSEPIPER's Afloat Global HQ/Center for Excellence in Involuntary Celibacy.

After 10 weeks on board, 2 weeks at home is just not enough, but it was enough to take the edge off, certainly. I'm going back in a better place upstairs, for sure. I was able to get a LOT done at home. Not so much time for my little fun projects, but some big long-term stuff for this winter and next year. And, along the way, got plenty of time with my family, including some time with two of my siblings, who have moved 1500 miles from Boston to about a 15 minute walk from my house... so I am looking forward to Christmas this year, for sure. As always, before heading back to work, I had to shift everything in my garage shop and clean up, which is something of a ritual, and gives me a chance to go over everything maintenance-wise in the house before I rack my tools and put away my toys.

As I had mentioned earlier, I found a big screwup on my little boat model, which required a bunch of work to correct. The spacing of the frames came out of square badly in a couple of places when the glue was drying, and I didn't catch it. As a result, the deck, which was pre-notched to set atop the frames, was out of alignment in a half-dozen frames... and badly out of alignment, like a 1/4" on something that is only 2 feet wide, easily visible to the eye. How the hell I missed it, I don't know, but the epoxy was already dried and the hull skins in place before I noticed, too late to realign the frames properly. I was almost ready to throw the whole thing on my barbecue and torch it.


In the end, I know a thing or two about fixing other people's mistakes using composites, and epoxy, fiberglass and microballoons cover up many sins. So I sawed out spaces for the frames in the deck, and after laying it out, filled in the gaps, which took about 4 days of sanding and filing and puttying.  The frame tops are also triangular gussets for the bulwarks, and unfortunately, these triangular gussets are super-prone to breakage- about half of the 22 frames were damaged at the tips, which I fixed by using bondo and then coated with thickened epoxy before sanding them into shape. They'll be partially hidden by the bulwarks, but to get the bulwarks aligned, I have to know where the frame tops are, and with the sheer of the hull, that's not an easy thing without a visual reference.

Working with right angles and  small gaps makes sanding a royal bitch, but I got there and put a rough sealing coat of epoxy across the whole deck. 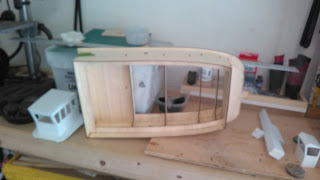 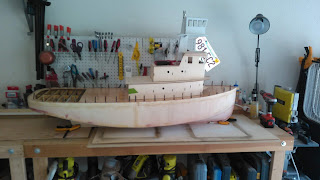 So, tomorrow I'll be flying in to New York, because sadly my company doesn't hate me enough to keep me at home and pay me not to come in. It's really getting to be the time of year when I have to think about what to pack in terms of dealing with the change in the weather now that New York is cooling off. The weather here has been delightful. I'm not anticipating the weather to be quite so nice at work, although fall in the northeast can be pretty fine.