Pro vs Amateur vs happiness on the water

These past six months I've been laying the groundwork to make some changes professionally and personally, to give me more options in life, like where and how I work, and how much free time I want to have and what to do with it.  In past years, I've done 2-3 extended tours at work each year, adding up to somewhere around 290-300 days at sea a year on average, which is way too much.This year, I'm doing just one, which is one more than I had planned, but is still better than 2-3. I currently have two weeks to go before I can go home. Almost finished, finally.
Thing is, I'm rarely out of sight of land. It's not the 'at sea' I most enjoy.

That nice salt air smell you get isn't actually the smell of the sea. It's the smell of the land, the smell of a soup of bacteria and planktonic life as it lives and dies. The real sea smell is just clean air. The turbulence of the water's surface churns the atmosphere close to ground level, and the interplay of heat and other physical forces drives the weather.

I know this stuff because it's important I know this stuff. My job. Well, part of it, though currently not a terribly important part. I spend more time agonizing over a calculator and legal niceties associated with carrying oil, when I'm not swinging wrenches or sitting for extended periods with my head in a cargo tank hatch trying not to breathe.


One of the things I'm trying to learn more about is the practical joinery in boat construction- the sweeping fair curves of frames, carlins and sheer lines that make boats beautiful. I can build a boat, but I've never done so purely in wood, and the idea has appeal to me, and in general, I truly appreciate the artistry involved- and the math.  Fiberglass and sanding and grinding covers a multitude of sins, and I do commit my share. As such, the expensive and unforgiving nature of boatbuilding in wood represents a pinnacle of artistic ability in my book.
So, this being the longest tour aboard of the year, I've been watching a lot of wooden boatbuilders online. This has also led to watching a bunch of sailing videos from people who travel all over the world in their little sailboats and run about having fun while going from A to B.

I've probably watched two dozen different boatowners documenting their trips.  Many of them are producing videos capitalizing on the scenery and scantily clad wives and sweethearts to drive views, paid for with private funds and supplemented by crowdfunding.


Seriously, there are people getting paid to have fun on their boats, in exchange for narrating their good time and providing gratuitous shots of their significant others in various states of dress.  What a world we live in.  Some of them seem like very cool people. Others just seem like spoiled rich dick suitcase pimps.

As I went on watching these videos, I'm deeply distracted by all the unsafe and sometimes outright dangerous shit these folks do. Sleeping while underway. Wearing a lifejacket inside the house. Unsafe wiring. Messing with the structural supports of a stressed-skin design.  Sailing without charts, without local knowledge and without consulting the available sources of information. Not having and knowing how to use safety equipment- well, you get the idea.  Thing is, most of these folks are carrying out normal pleasureboater habits and practices, and they sure seem to be having a lot more fun than I am, and spending less time in their own heads worrying about the things that I worry about. I'll say it, knowledge is a double-sided bitch at times. All that safety-mindedness and drilling these past 20 years has taken much of the joy out of working on the water for me. I don't spend nearly as much time admiring the sunrise or the color of the sea anymore. Perhaps this is an artifact related to my location and current occupation more than anything. I was trained to expect that I would have less time to enjoy the things that attracted me to this work in the first place as I advanced. However, I'm convinced that I can recapture some of that wonder, and will do so with some changes. I'm truly looking forward to it.


Look at this next picture. Moonset at sea, predawn, midwinter. 15 years ago already, and I remember that morning like it was yesterday. A few minutes later I climbed up on Monkey Island with a hot-water wand to rinse the bridge windows off for the morning. 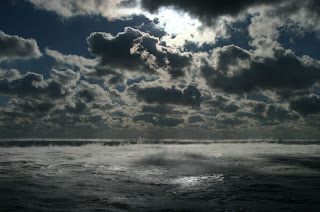 I can't remember the last time I watched the moon set over the sea. I do know that it will be sooner than 15 years, though!

As my brother in law once told me A lot to be said for a steady pay check. I am currently seeing lot of nice sunsets and sunrises in the North Atlantic but the shit scaring weather is something I would pass on if I could. Enjoy your blog to the max pls keep it up.