On Diaper Rash and the Day of Change

Well, I sure do wish it wasn't raining, because it went from 90ish degrees, where it's been hovering for the past month, to 58, here at HAWSEPIPER's Afloat Global HQ/ Home For Those Afflicted With Terminal Diaper Rash.

The weather on this part of the coast is rarely what one could wish for when it comes to working on the water. The wind blows all winter, and in the summer, it just... stops. It's the southern portion of the Northeast, but from Mid-July to early September it's hotter here than at my home in South Florida.

This summer was particularly wet and humid, and there was a lot of diaper rash affecting many of us. Hot and humid days, clothing that doesn't breathe well, sweat and dirt, well, chafing becomes an issue, as does repetitive exercise, so the chafing doesn't have time to heal.


Now, I grew up commercial fishing. My ass and parts were cold and wet half the year, and hot and wet the other half of the year. If it wasn't for all the moving around, mold and mildew could have set in. I absolutely had a budget for athlete's foot powder and antifungal spray. Athlete's foot may be bad, but Lobstermen's Balls is also a thing.  Think dropping some plums out of a grocery bag and having to retrieve them after they roll all the way down a particularly long driveway. And across a street.
Unfortunately, once chafing does set in and you don't have time to sit with your knees at 10-and-2 for a weekend to air out, real intervention becomes necessary. When I was 16, I was introduced to Bag Balm, udder cream for cows. 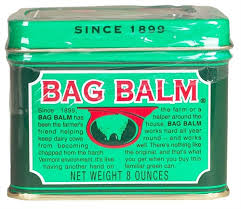 If you're not familiar with this golden panacea, it's a medicated grease that soothed and treated cracked and chafed udders on milk cows, but some enterprising soul discovered that it also worked great on butts and nuts.
At any  rate, for the next 20 years, there was one of these cans on board any boat I ever worked on. The feeling of, well, being greased up from the waist to the knees takes some getting used to, but when you're facing the prospect of walking like an arthritic cowboy for the next two months, walking around feeling like you just buttered your bread is a small price to pay.

Also, your walking pace on deck picks up by like half a knot. Less friction.

Everyone who lived somewhere where the world is still sane, where people still live by necessity with an awareness of nature, knows that the turning of the seasons comes with a changeover day, where the gradual and graceful transition into new weather patterns goes through an abrupt and obvious upheaval. This is far more obvious in the untamed places where the subtropics meet the temperate, or where the temperate meets the boreal, but really, anyone who lives in rural areas can see the signs if they look.Those who live in the transition zones get ice-out day, when the frozen lakes and rivers start pinging and crackling and a few days later come free in a thunder that can be heard for miles. There are also the bug hatches in warm weather, or pine pollen day, or the turning of the trees.

Today marks the death of summer, I think.  It's the day when the temperature dumps 30+ degrees and the smell in the air changes. It's there, under the smell of warm soil or wet and scorched pavement for you and UV-damaged paint and steel for me. Something has changed, and the darker mornings we've all noticed for the past few weeks are getting darker, and the animals are getting unsettled, and the plants are just exploding with a last rush to bloom or throw pollen.
It's actually  a nice time to be someone who appreciates nature and studies its' cycles. Though I do miss green things terribly while I'm at work... but I live in a place of perpetual growing season, where you've never seen so much green, which helps.

It's the end of a long, hot, and difficult time to own testicles and work outside. We'll have Indian Summer probably, although with this rainy summer it might be muted, too, but I'm sure we'll get a couple more ball-burners, but the wheel has turned and God in his mercy has stuck a fork in summer.

Well said, all around. This summer was a hot, sticky bitch. Haven't fought swamp crotch like this in years.