I’ve been quietly living with a disability for about 5 years. Not something I normally talk about here, but here I go anyways.

Shortly after I got married, my wife and I discovered that I was born with a genetic inability to say no to my wife. In the honeymoon phase, this made it very difficult to keep a budget, have a savings account or drive past a mall.

As our marriage progressed, I would occasionally screw up my courage and let out the odd timid peep of “do you think we should?” when asked about, say, buying shoes instead of paying the quarterly tax bill. This, of course, led to a constantly full closet but many sleepless nights, and not in the good sense.

With time, of course, as a married couple is wont to do, people get to know each other as they grow together, and my wife came to recognize that while she had a walk-in closet of beautiful designer clothes and shoes, I was wearing wal-mart fashion. This led to an awakening of sorts, and to my eventual manning up and occasionally saying no to new spending, all the while assuming that by doing so, I was saying goodbye to ever having sex again this side of judgement day. Like I said, growing together.

Magically, I did not burst into flame or get forced to live in exile for having said no. life went on, and we have been able to do some things that you just can’t do living check-to-check. My wife still has a decently-stocked closet, and the ‘linen’ closet is actually a shoe closet with some shelf space for linens, but in fairness, some of that is even mine. Not that I’d buy a lot of shoes anyhow.

So, now that I occasionally have to be the hand of restraint, my wife has taken this to mean that I am the great skinflint of the world. “Hohnee, you veddy chip! You… {gesture of a raised forearm with a clenched fist} Mao De Vaca, hand of de cow!”
“Uh… thanks?”
“Nao… mao de vaca! You veddy chip!”

Mao de vaca.  She's got a walk-in closet of clothes that cost more than my parents paid for their first house. Her purse cost a week's wages from what I made fishing when I was single...but I've got the moo moo booger hook!

Now, I joke, of course, and so does she. The fact is, I'm handsome enough that I can get by with a $9.99 Wal-Mart polo shirt and still make the girls swoon. Or maybe just pass out from nausea, I dunno. But yeah, she dresses nice, and I in fact feel silly when she buys me clothes that cost too much. My wife understands that the money I don't spend on clothes goes towards hers, and somehow in her South American way of thinking, this makes me cheap but loveable.

Now, when I came home from my last trip, I came home to an empty house at the Ant Farm. My wife was in Brazil organizing her mom's healthcare for an upcoming surgery. She spent a busy 2 weeks meeting, bribing and cheerleading to get everything in order, and then came home... all paid for, trip, stay, surgery and aftercare, by us, and made possible principally by the good folks who tolerate my presence here on our floating gas station, which is to say, by her mao de vaca, who thought to have a savings account just in case, say, someone needed a kidney out.
Long story short, my mother-in-law is recovering, less a kidney, and one surgeon down in Brazil is getting a new goddamn BMW, I'm sure. Meanwhile, my wife's family is still enjoying the presence of their matriarch courtesy of a cheap prick who did what they couldn't. I'm assuming that, for my wife's family, I've bumped the Holy Spirit out of the #3 spot in the holy trinity for the time being. My wife's uncle sent her back with a big bottle of cachaca, moonshine, basically, or maybe rocket fuel. My wife's nephew, my mother-in-law's primary caregiver, and the family joker, sends me a bottle, too, but not your traditional glass bottle. I get this: 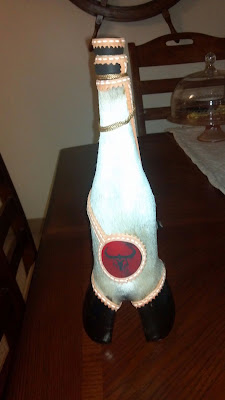 Labels: home life of a mariner, Thoughts of Brazil

Related to your last post in which you did not want to say anything bad about the dead. Obviously, others disagree:

Oh, and congrats on the family's improved health, or at least your standing within the family.