I got steam heat


OK, sorry for the obscure show tunes reference, first off.

Today's post was inspired by Borepatch's great mention of the ongoing saga of the S.S. UNITED STATES

Modern ships are powered with giant slow-speed diesel engines, ranging in size from that of a small house to that of, well, a larger house. 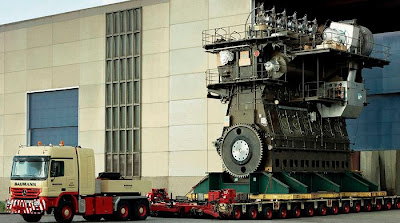 The era of sail may be over, but there are still sailing ships being built. So it goes with steam- the heyday of steam ships ended in the 1970's, but you will still find plenty of ships from that era working. While far less efficient than steam power in terms of fuel consumption per horsepower (burning 2+ times as much fuel per hour when compared to equivalent modern diesel engines) steam power still holds several advantages- a longer service interval for major maintenance, and instant throttle change variability and availability, as well.

Ships' diesel engines don't have transmissions- they're just too big for that sort of thing, and the transmission to handle that much power would be half the size of the engine itself. So, to go in reverse, the engine needs to be stopped and restarted in the opposite direction. A massive reserve of compressed air must be held in readiness for this purpose, but, even so, there is a limit to how often an engine can be shifted in a short time- I've never done anything but simulator time on a diesel plant, but the simulator I trained on was modeled for training on a top of the line ship, and had only 6-7 shifts available in a 15 minute period. This makes port entry a determined process- once started, it's not so easy to stop!
At sea speed, modern diesels must be throttled down gently- in the range of 1rpm at a time, literally, when shifting from sea speed to full ahead (full ahead is actually not quite 100% of the usual throttle range- it's the full speed available when throttling may be necessary. As I said, diesels don't like to change speed. Such a large engine must be cooled and warmed slowly to avoid thermal stress to the engine, so going from sea speed to a speed where the engine cools to a point where it can be throttled more rapidly is critical. 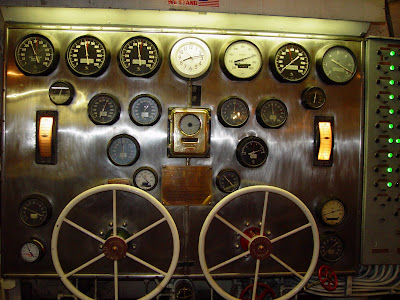 One is labeled 'ahead' and the other 'astern.' Pretty simple.


The steam revolution didn't stop at the turn of the last century. The last two generations of steamship were turbine powered- no giant cylinders turning a shaft like you saw in 'Titanic'. JUst two turbines in the engine room. For a single turbine array, there is a small, high-pressure turbine that takes steam direct from the boiler system, and then a larger low-pressure turbine that takes the now partially-spent steam from the high pressure turbine and gets some more oomph from it before returning the steam to the condensers and ultimately back to the boilers. 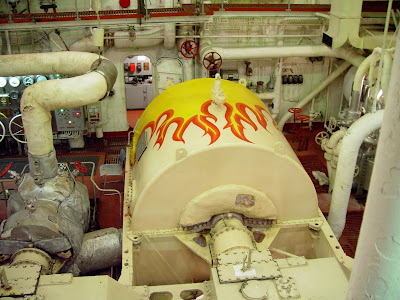 The boiler array is far larger than the turbines, requiring it's own room. The boilers feeding the above turbines were the size of a house- 3 stories tall and 60 feet wide, maybe 30 feet deep, and there were two of them. 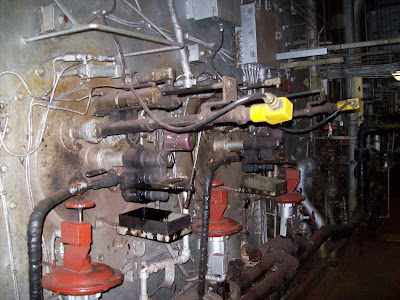 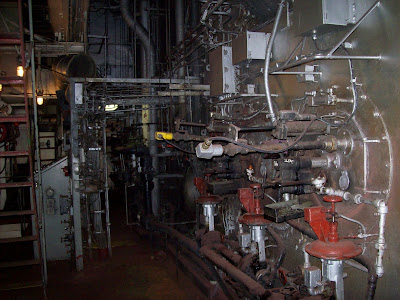 I started out in the engine room of a steam ship. I planned on staying there. One long weekend spent hanging halfway out of one of these boilers during a breakdown in the Caribbean was enough to send me out on deck forever. Burns, heat, heatstroke, repeat for 3 days. 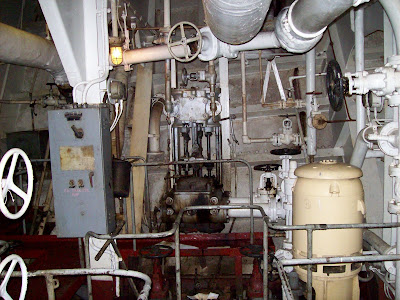 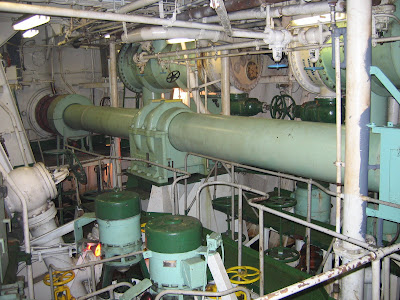 Connecting the turbines to the shaft is the bull gear, a transmission that takes power from both of the turbines, which are spinning at differing rates. Beyond the bulkhead in this last photo is the propeller and rudder.
Posted by Paul, Dammit! at 11:25 AM

Heh.
Don't know the brand by looking at them, but when @ GE, we used to build those machines for the Navy & commercial ships.
3rd pic sure looked familiar, though.

Can't remember the manufacturer of the boiler, but the condenser, feed water tank, bull gear and a bunch of other stuff came from Bethlehem steel in Quincy MA.

reported most people settle his or her borrowing products timely as well as with no outcomes
A number one credit debt charitable trust expects may be consumers looking towards them pertaining to aid throughout cash advance obligations so that you can two times this. personal debt a good cause says about used the actual payday, huge curiosity lending products this season. All the good cause tells four years before the number of shoppers using them seemed to be insignificant.
przydatne informacje
http://szybkapozyczka24.info.pl
wyświetl witrynę
pożyczka krecik
szybkie kredyty gotówkowe bez biku

That is the reason movie stars and athletes prefer HGH supplements to further improve lean muscular mass reducing fat. If you require a simple trick to speed up your metabolism, eat this 200 calorie breakfast meal within 30 minutes of getting out of bed and drink at least 8 ounces of water within 10 minutes of waking up phen375 hence, it's easier to exercise within the morning before breakfast. Kegel exercises: Kegel exercises involve making small contractions with the muscles at the vaginal wall. These may be full of carbohydrates, but they'll help you stay feeling full for the number of years http://www.phen375factsheet.com the sandwiches you make won't have lots of butter or margarine and definately will simply have healthy fillings like salad and fresh meats as opposed to highly unhealthy food. That is the reason fat loss decelerates dramatically after a number of days over a crash diet [url=http://www.phen375factsheet.com/]phen375[/url] the reason we detoxify your body would be to rid ourselves of toxins that people ingest within our food and drinks.