Today starts the sixth and final week of this voyage for me. I went ashore last night for a little R&R (Sushi, and some expensive cheese from Fairway market) and to load up again on groceries for another week's voyage. This week I've been taken down a peg, filling in as tankerman on someone else's barge, but it's all the same to me, cash for my impending trip to Brazil. I've been harbor whoring - making myself available on my off-time, since New Years', and it's starting to tell. I'm pretty beat. This is my last time "working over" for a few months. The bags under my eyes are getting bags under their eyes, I think.

This week has brought some monkey business to New York harbor. The weekend started off on the wrong foot when some dink dumped a bunch of containers off a ship and onto the bunker barge alongside it- no injuries, thank God, which is a miracle, considering. This wasn't one of my employer's pieces of gear, so I don't know anything first hand, but check it out: 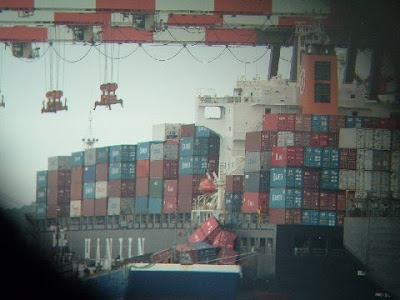 Amazing, really, that no one was hurt.

In other news here, the Blue Marlin is here to carry a passel of tugboats to Nigeria for a second life. This type of heavy-lift ship ballasts down until her decks are deep under water, whereupon her cargo is floated over the deck, and then the ship pumps ballast and rises up under the cargo before securing it for sea. I snapped a couple of pics this morning. The thing is huge- well over 200-foot of beam. Check it: 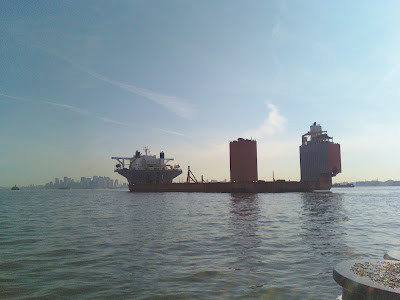 This is a forward house design- the thing's so wide that it looks odd from this angle- at the port and starboard end of the stern are the stern castles- seen better from a stern view: 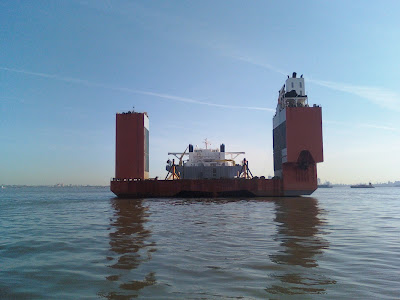 Bear in mind that you could place a whole NBA regulation basketball court between those two structures on the stern. 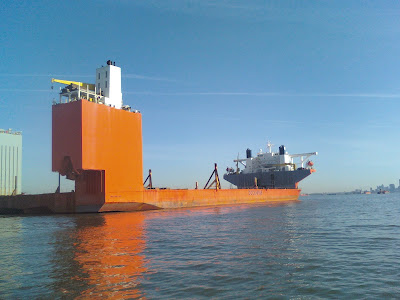 She's since been repainted, but if the name sounds familiar, it's because you've seen the Blue Marlin before, after the USS Cole tragedy.

Using the rhetoric "You can fit a boat on a ship, but you can't fit a ship on a boat" no longer applies.

hey, paul . . since the previous comment took, i just wanted to say i've tried to leave comments in the past few months and they've been rejected . . . by blogger i believe. cheers.

Thanks, Capt. Still more than a month off, unfortunately. My wife comes from a mountain village; pretty much a 24 hour series of plane rides that costs about one arm and one leg for the round trip. Pretty sure I'll be sitting on a chicken crate or something for some of the trip.

Good luck on your trip to Brazil. You sound like you're working your tail feathers off to get there. However, from a purely no-callus view, it sounds like am amazing life you're living right now! :)

Great blog, by the way.

----
check out our boat classifieds and blog

Normally I wouldn't be that excited about a classified-ad post in my comments section, but yours, sir, is full of good stuff. Like the Sears catalog in December, when I was 5.

Nice article, thanks for the information.

Great pictures, I had seen the Cole picture, but your others brought the ship to a more exact measure of perspective.
Enjoy Brazil, my wife' family is from the same countryside background and while the thongs are as evident as in the big city, the country has an allure of it's own. Good on you for your willingness to adventure and claim kinship with the family.