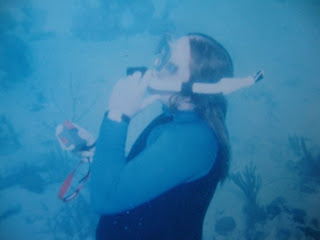 This is me, about 40' underwater. I was thin, and had all my hair (and extra, too! Look at that long hair. Sorry, ma.). It was 1997, and I was in Belize, diving the barrier reef as part of a tropical natural history course at college. Once upon a time I was pretty good at free-diving. I could swim very comfortably at full speed for about a minute and a half underwater, and if I simply rose up and down, two minutes.

In the intervening years, I haven't been doing much diving. Up until three years ago, I did some basic diving services for some local fishermen- changing zincs and cutting rope off of fouled propellers, that sort of thing, when I was home, but even that has stopped. I'm down to about one dive a year, which is too bad. When my boy is a little older, I'm really looking forward to spending some quality time underwater- he's a lot like I was, with a great affinity for spending time in the water. He doesn't have my obsession for being out on the water (preferring to be IN the water), but he's his own person already- that being said, we bond pretty regularly under circumstances involving getting wet muddy feet and then being yelled at by his mother.
Going lobstering was something that I immediately wanted to do the first time I saw a lobster boat up close. I was the same age as my boy is now, 7. I went out once with my friend and his father, and that was it. For the next 10 years, I went out twice a week at a minimum, from May until November. Lobstering wasn't something that my dad passed on to me in his sea stories. It was all my own.
I wonder what my boy will find to be passionate about? I hope it's medicine, or law, of course, but whatever it is, I hope that it fills him with the same satisfaction that it does me, 30 years later.
Posted by Paul, Dammit! at 4:32 PM