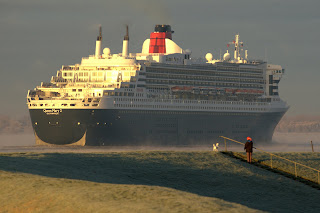 My coworkers and I trade scuttlebutt, like any sailors do when there's more than one of us in a room. Among the usual conversation among the black oil set is the subject of what a particular misery cruise ships are to tie up to.

Slab-sided ships like cruise ships and Pure Car/Truck Carriers use recessed bitts to allow for transit through the Panama Canal, where guide wires can be fastened to the hull to guide her through the canal locks. As such, they're placed for use by the mules, the little trains that guide the ships through the canal. They look like this: 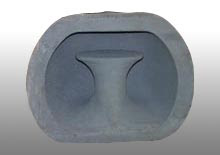 These recessed bitts are not placed, however, for use by bunkering barges. They can be used for such, thankfully, but they're placed for canal transit, not for bunkering use. The ability to employ these mooring points is coincidental to bunkering.
Now, these types of ships usually have to take fuel oil through a watertight door or recessed area in the side of the hull above the waterline. Generally speaking, both PCTC's and cruise ships are a pure misery to securely tie a smaller vessel to. One has to pass up a bow line and fall back on it... a long damn way, half a cable, sometimes, in order to line up a bunker barge to pass up a fuel hose. Then, hopefully, there are one or two recessed bitts (but never three!) that can be used to get some spring and breasting lines to the barge. Hopefully. Sometimes not. And finally, one can hope and pray to be in the neighborhood of the stern of the vessel so that a stern line can be passed up, and one can hope and pray that there will be some way to fairlead the line to hold the stern of the barge in.

You can see that there is a lot of hoping and praying involved in getting this sort of job set up. Some ships, like the Queen Mary II, just aren't set up very well at all for bunkering. The QMII, in fact, is downright nightmarish.

Nary a chock or bitt to be seen. In fact, it's possible to get a bow line, and then there's a small recessed bitt just aft of the bunkering port... and that's all there is to get a bunker barge or self-propelled bunker tanker moored alongside. Well, we don't have self-propelled bunker tankers here in the US, and they being generally much longer than the American Tug/Barge combo that is the norm here, there's no way to get an effective stern or after breasting line between the ship and barge. What this means is that of the maybe four lines that a barge can use, there's little protection from surge, should, say, a Staten Island Ferry blast by at high speed, pulling the barge off the QMII as she surges by. This can create something of a stressful situation, and exposes all parties to less-than-idyllic conditions.
As I've mentioned in my other entries on this subject, it boggles the mind that to date, most new ships aren't built with bunkering in mind as part of the design. Granted, it's a subacute issue; no one's going to not charter a ship based on the fact that it's an assache to bunker up once a month. And in all honesty, a small loss, in terms of manpower and efficiency, I suppose. BUT, over the course of a long lifespan, a few hours' loss take a long time to add up. One catastrophic loss, even, might not be enough to make anyone change their thinking- say, having a bunker barge get ripped off her moorings and a 6" fuel hose at 60psi torn apart, spraying oil for a good 30 seconds or so. That's certainly enough to get national attention here in the US. In the rest of the world, where such things do happen periodically, it's not such a big deal. Nonetheless, more than some seagulls will pay the price when this does happen here. I'd imagine that the QMII is safe, merely because it IS so difficult to tie up to. It's an attention-getter that screams for extra lines and hyper-vigilance. PCTC's on the other hand, are more businesslike, and familiarity can breed complacence in mooring up to them. Other than New York, the major cruise ship ports can quietly handle a bunkering mishap. BUT, New York is a popular cruise ship port, too. For the cost of just one extra recessed bitt in the neighborhood of the bunkering port, a lot of potential liability can be reduced.
Posted by Paul, Dammit! at 11:05 PM

Pehaps a copy of this blog entry should be sent to Stephen Payne, the designer.

Only thing worse than cruise ship is a car carrier