It's difficult to believe that my dad isn't going to be there when I get home later this week. It's been almost two weeks since he died. As a family, we had been preparing ourselves for 25 years, when he was first told that his heart was working on borrowed time. He'd been dodging bullets in the form of cancer, heart disease and diabetes for that whole time. A childhood spent in orphanages and foster homes left him exposed to polio and rheumatic fever as a kid, though it took 50 years for that to catch up with him. He was 76, and had been married to my mom for just shy of 49 years.
+++++++++++++++++++++++++++++++++++++++++

My father sailed in the heyday of the 'tin can' navy, when tiny WWII-era destroyers were the workhorses of the US Navy fleet. He remains the most widely-travelled man I know of, having visited almost every coastal nation in the world.
The father I knew was an introspective, gregarious, extremely kind and religious man. Arthritis, coupled with scoliosis, had progressively weakened his back as an adult. He retired when I was only 3. This was about 10 years before his heart went south. I never knew the wild sailor that he was, but the stories were too insane to be anything but unvarnished truth.

Like all US Navy sailors, the only form of recreation after several months at sea was to go drinking with shipmates at the first opportunity. This particular story centers around Malta, something of a Mecca for the fun and alcohol-seeking sailor, I guess. My father was coming off of the longest sea cruise he'd ever been on.

when arriving in Malta, he and his off-watch buddies from the engine room made a beeline for the nearest gin mill. Sailors being sailors, they proceeded to get kicked out of bars that night for being rowdy, one after another, each time working their way further from the ship, out of necessity.
At the end of the night, dead, dead drunk, and a long walk from the ship, the men started to stagger back. Being a young bunch of guys, they were still energetic and animated, if bombed.

Down the quay from their ship, the men spotted a massive, gleaming yacht- bright white amidst the dark water's backdrop, like a magnet for the eyes. This ship was obviously brand new, and the largest private vessel than any of them had ever seen. They needed to see more of it, to see how the ultra-wealthy got around from A to B. While standing at the gangway of this beautiful ship, someone suggested that they, a bunch of professionally-trained and supremely qualified master mariners, take the ship out for a joyride. She wasn't much smaller than their destroyer, the men reasoned, so she should handle the same. 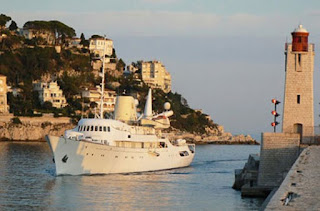 The boat in question, shown here, was, unfortunately, owned by Aristotle Onassis.


So, aboard they went, onto this luxury yacht. My dad and his friends went to the engine room and warmed up the engines.Others went to the bridge and looked things over.
As the men started casting off the mooring lines, the cavalry showed up. Apparently, you can't steal a megayacht all that discreetly, and the cavalry, the pulizija, showed up with automatic weapons. The men were marched, at gunpoint, onto the quay.
Shore Patrol found them, too, while the 5-0 were waiting for the paddy wagons. The watch officer on shore patrol requested that the men be marched to their ship prior to processing, so that the captain could pull their paperwork and send it with the men, who were to be arrested and held in prison until they faced trial. While the pulizija were nonplussed, the watch officer noted that the men were US citizens and actively serving in the US military, and having proper documentation would prevent the Maltese and American consulates from having any conflict.
Well, this resonated with the locals, and my father and his friends, hands shackled, were marched at gunpoint, staggering and stinking drunk, down to their ship. At the gangway, the shore patrol stopped the group, explaining that he had to wake up the captain.
A few minutes later, the captain, in a foul, foul mood, walked down the gangway. He proceeded to let the men know that, in no uncertain terms, they were going under the bus, and that they would be tried as civilians, and left to rot in Malta, as soon as their papers were processed. The captain ordered the men to line up outside his office aboard, for immediate processing and discharge to the custody of the Maltese authorities.
The pulizija , being a foreign police force, were asked to wait at the gangway, and the captain arranged for a steward to serve them drinks while they waited. The men then were marched up the gangway under the screams of the furious captain.
Once the men were aboard, and assembled outside the captain's office, sailors with boltcutters opened the shackles. The ship's Executive Officer told the men to go immediately to bed to sleep it off. My father went to bed.
After an interminable wait, the Maltese cops got antsy. They started up the gangway, only to be stopped by the gangway watch. A US warship is the soverign territory of the United States. It is, in fact, considered to be 'US soil,' and an unauthorized foreign police presence would be viewed, the men were told, as an attack on the US. When asked about the disposition of the sailors who tried to steal Aristotle Onassis' yacht (he being the wealthiest man in the world at the time), the gangway watch claimed that they had no idea what the police were talking about.

Obviously the story doesn't end there. The US consulate got involved. The captain got a nastygram from the navy AND from the Maltese government. The captain then mentioned that the police in question smelled heavily of scotch, and he had no idea what was going on. The police force was shooed off the dock not long after.
_________________________


The men in question were punished, of course, at the captain's mast. A court martial could have easily been convened for each of them. The captain, however, would lose his engine room crew, and his ship would truly be in deep shit with no sailors to actually run the plant. Some guys lost rank. Some were docked pay. My dad was restricted to the ship for the duration of his assignment to her. He was 'in hack,' however- his punishment wasn't recorded on the ships' books. As a potential 'lifer,' the captain didn't want to see my dad's career ended. He dodged a bullet.
Posted by Paul, Dammit! at 5:45 AM

Paul, I'm so sorry for your loss.

You've told me that story before, but it never gets any less great.

Malta :: Little island in the med given the "George Cross"by the King of England during world war two , there are no "carabinera"on Malta try Italy a little way North...

Very sorry to hear about your father. According to that story he sounds like he was the epitome of what a military sailor should be!

Long hitches have been the architect of so many memorable nights ashore. That's why the best part of this story is that if I, or you had been in Malta that night we would have hopped onboard that yacht thinking it was the greatest idea since canned food for that is the insufferable inebriated logic seafaring fosters.

God bless the Captains who've looked the other way when they knew it's only for want of a night away from the regimen of a ship at sea for which we commit such heinous acts. Acts that make landlubbers (And the police) blush and wonder what in the hell is wrong with us.