bring out the gimp! 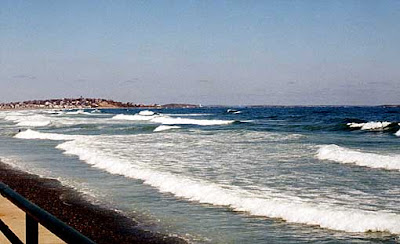 Before I left for work earlier this week, I took a rare opportunity to take a walk with an old friend. An old girlfriend, to be precise. My first girlfriend, to be exact. We still talk. I don't give a flying rat's patoot about my past, but for whatever reason, we stay in touch. Inappropriately Hot Foreign Wife approves. Apparently it satisfies her that I can be sentimental under the right circumstances.

Anyways, we went for a walk on the beach, and as we were walking down from street level to beach level, small talk ensued.

She's a sharp cookie, my friend. A medical professional. Before we stepped foot on the sand, she casually says "So you're still limping, huh?"
I prefer to think of it as the rolling gait of the professional sailor, but yeah, I have a little gimp. She noticed. I had it when we were dating, back when we were both underclassmen in high school. On bad days I had my little rolling walk.
As always, rather than make her uncomfortable, I shrug it off. "Yup. It's permanent now." And the conversation moves on.
Truth is, I don't normally feel any pain in my hip anymore. Last night, when I was out on deck in the cold and pouring rain all night, I felt it, yes. I felt uncomfortable enough to notice it. I'm pretty sure that it didn't effect my gait, however. I just walk like there's a swell hitting us on the beam. Of course, last night, there was. We were swaying like a cradle. But the other day, I'm pretty sure that the beach wasn't moving. And I'm pretty sure that if I worked at it, I wouldn't have walked like I had a rock in my shoe. But why work at it? I'm as vain as anyone else, but I'm probably lazier than some. I can't be bothered to walk differently, and if I did, I'd probably feel like I had a stick up my ass. Besides, at this point, as far as I can tell, if it would be comfortable for me to walk like everyone else, I would. It's just that most folks look to me like they're trying to clench a $100 between their butt cheeks without losing it down a pant cuff when they walk.
Posted by Paul, Dammit! at 4:54 PM