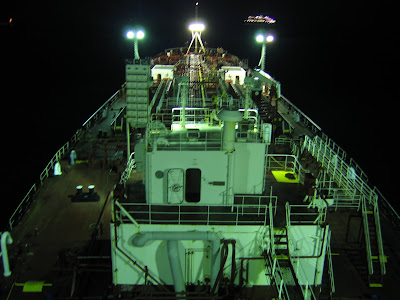 Well now, we're still hanging on the hook, waiting for something to happen. A Damn passive Christmas Eve morning, all things considered. We spent last night humping a big-ass load of food and supplies on board from a supply boat that came alongside after dinnertime. Busy night, but we got our Christmas goodies for sure. Spirits were high, which really made the time go by. This ship has no stores crane, so we have to hug and lug all the boxes and parcels down to the stern of the ship from the midships cranes. For whatever reason, there was a lot of joking and everyone worked well together. We bucket-brigaded a dozen frozen turkeys and 20-lb. pork shoulders early on, so it's turkey/ham and fixins for yours truly tomorrow, something which I wholeheartedly approve of..

In the six years that I've worked for this company, this will be my 5th Christmas aboard. This has been my decision to make, as it's more important to me that I not spend my summers out here in the Gulf, where I would be at risk for heatstroke daily, but the only way for me to be able to do that is to work over the holidays, which is a damn shame, but there it is.
Anyhow, there's a chance that I'll be home for New Years, which would be nice. I could give a fuck about the New Year celebration, really. I just want to be with my family, and do mundane stuff like see how my church was decorated this year before everything gets stowed again. Little stuff, you know? And some not so little, too.

My stepson emigrated here from Brazil at the end of summer. In the past six months he's had to learn English, which he is rapidly picking up, and he has been telling me over the phone, in shocked disbelief about how cold Massachusetts gets. I remember the first day the temperature dipped under 75 degrees on labor day weekend. He was chilly. My wife is no help there, as she is also freezing. The two of them have become complete homebodies since Thanksgiving, and this past week especially, as they got a solid foot of snow. Now, thankfully, neither of them has been sledding yet. Imagine that? I am hopefully going to be able to get them both bruised and frostbitten in the name of the best damn free entertainment that New England has to offer.
Although I grew up in a coastal semi-suburban community, I have spent enough time wandering the earth in my pre-sailing days to develop a rural New Englander's taste towards the out-of-doors. My wife grew up in a metropolitan tropical city; she'd rather be in heels somewhere indoors, but myself, I'll take the woods and waters. My stepson is going to get a good heathy dose of that lifestyle. In the semi-seclusion of my ship, I return home to find so much of that canned-entertainment lifestyle leaves me feeling unclean. I wonder how my stepson will see it when he's my age?
Posted by Paul, Dammit! at 8:05 AM