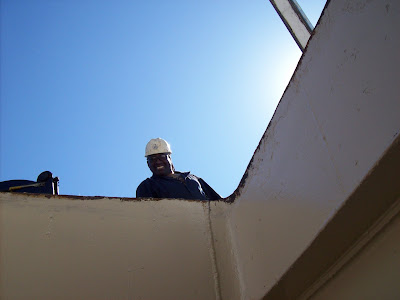 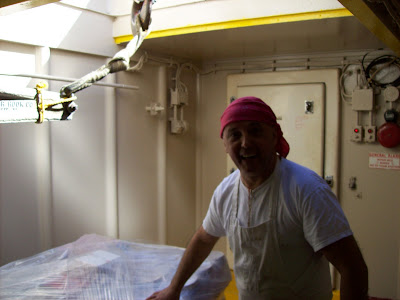 Been a while since I put some pics up. Here's Big Manny looking down the steward stores hatch.


Juan the steward, one of the funniest and most entertaining men I have ever met. This pic was taken at the foot of the stores hatch. Juan can take the good with the bad and make it edible. I'm not fooling, the guy's a genius.

Waiting for all hands to be called, and we can get out of Houston. We're heading up the Mississippi for our next stop, there to load black oil (I think) for NY/NJ.

For the past week, I've been trying to get some boxes of books sent home, and despite a stop in Savannah and 3 docks in Houston, it was impossible for me to get to the post office. Our next stop is no good either. Here's today's thought:

You should see the mo-mo's that run refinery loading docks. There are some sharp cookies, without a doubt, but my goodness, the bulk of 'em look like they're stuck on step one at the wednesday night AA meeting in the local church basement. Rough.
Anyhow, these people go to work and do their thing amidst multi-billion dollar stockpiles of oil, and, more importantly, the machinery that refines oil. When they're not doing that, however, I suspect that quite a few of 'em are watching COPS to see their family on TV.

So, to work on a ship these days, one needs to go through a background check, medical check, and paid-for-useless-ID check. We get vetted by Uncle Sugar. Not to say that every now and again we haven't had ex-cons and lowlifes abord, but by and large, we undergo a lot of scrutiny to get permission to do our jobs. Unlike some of the folks who are working in the refinery.

So, it bakes my balls a little when we get forbidden to go ashore at some refineries for 'security reasons.' Security my ass. There are guys who are wearing monitoring bracelets working in the refinery and I can't go to the post office across the street. Homeland security my ass. Oh, but we've got these new $135 ID's that were required for us to access secure areas in refineries and shipping docks... but, of course we can't go ashore, so that's a moot point. Incedentally, the government contractor who runs the ID scam is a major defense contractor who just happens to be falling on hard times 'cus they can't build ships that the navy will accept, and no one wants their 70's era airplanes. Corporate welfare.

Does the UPS guy go through this bullshit? 'Cus his job is a LOT more sensitive than mine. He could do more damage than I could, certainly.

Anyhow, when we aren't restricted to the ship, we are arriving in the middle of the night after an extended period of wakefullness, or, of course, arriving on the weekend. And thus it'll have been 3 weeks before I get to go to the post office and see if anyone I went to high school with has gotten their picture on the board with the big boys.

Ah well. Anyhow, in other news, Ernie, the other steward, has begun decorating the crew mess for Christmas. Somehow, by mid-December, the place always looks festive. I've got to say, we do a nice job in decorating as a crew.

Anyhow, if you'll excuse me, it's time to caffeinate in preparation for saying Bon Voyage to Houston and her many unsavory smells. I'm looking forward to our next stop, despite it being one of the no-go refineries. I always like steering the ship up the Mississippi. The ship usually tracks great, and the pilots are satisfied with us keeping the heading within a degree or so of where they ask, so we can relax a little and watch the river roll by. Good times.
Posted by Paul, Dammit! at 4:10 PM

Do they station security at the gangway to keep you from going ashore or are you just told that you can't get off? How on earth do people sign on/off?

Here is a thought, don't lower the gangway in those ports. Cite 'vessel security' when the shore agents yell up to have it lowered.

Call the "Captain of the Port" and see what he has to say about an American Crew being restricted to a vessel? Are you in a Union??

Back in '02 I had a deck gang contemplate refusing to hook up hoses at an oil dock in the Port of NYC. There was numerous union contract violations due to the restrictions they claimed. It was tense for a bit until the captain/agent/terminal manager worked out a compromise. This was a US vessel touching at a US port for the first time in 2 months.

Until ship owners, captains, officers and crews take a stand this BRAVO SIERRA will continue.

Years ago I was on a Non-union Tanker and we were restricted to our ship due to a refrinery strike in Port Arthur. Our Company paid us Time and a Half for the time we spent in port at that dock.