To be an American

I'm so very, very happy to report that Inappropriately Hot Foreign Wife has just passed her US Citizenship exam today!

Most Millenials and Gen Y'ers tend to be apologetic for being American, or at the least, have a sense of guilt or embarassment at belonging to our parent culture. Patriotism is held in the same contempt today as being a member of the Communist party was during the cold war. The song 'Proud to be American' is somehow now a shameful thing for people under 40 to hear... if you're born here, anyhow.  For many foreigners and immigrants, despite what popular media impressions may suggest, the American Dream is still very much alive.

And so it is at the B family compound back home. As my wife approached the date last year when she qualified to apply for US citizenship, she discovered a stronger desire to be American, and not just a hyphen-American. Within her community, people have said for a while now that she's become Americanized, and they're correct. She's retained the (mostly) wonderful aspects of her Brazilian culture (waxes, teeny tiny underwear, etc), but she's also experienced cultural creep as our ways imbued themselves on her behaviors and attitudes, and like so many hybrid things, the combination of the two seems to be better than the sum of the individual influences.

Within the close confines, the Family B is the same today as we were yesterday... yet things are different too. 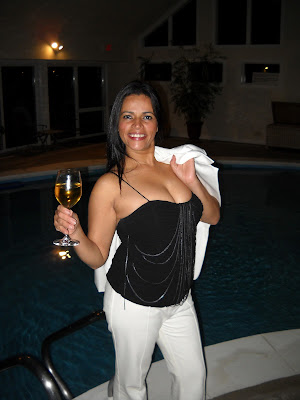 Congratulations to her! Immigration is what made this country what it is, and I'm glad the immigrants bring their traditions with them.

We get to pick the best, and pass on the others. Me, I hope the teeny tiny underwear thing catches on (only with the ones that can do it, of course.)

I'm happy to welcome her to the US.

Congrats to her from here, as well.

That's huge. Many forget, the struggles some folks have succeeded with to become citizens. God Bless your wife and family & God Bless America.

Congratulations to you both. It is quite an event.

Congrats to her, getting citizen ship nowadays is not a easy task.