Back to work. My first watch back has been messy. There's about a foot of snow and ice on deck, courtesy of a winter nor'easter that walloped the northeast a few days before I flew in.

It's been a busy time. I may be able to sleep more here at work than I did at home. Now, I had a great time at home, but it was not the ball of sunshine that it normally has been. That being said, we had a great time, when we could, but life intruded, and yelled in the outdoor voice, too.

That being said, I punched the days in the face, getting the scut work done in clearing my shop, finishing my giant tool cabinet (less the topcoat of paint), and making room.

So, my kid has a strong artistic streak. He thankfully wishes to not be an artist as a career, but finds it a hell of a hobby. Recently, he asked if he could repaint his room, like really, really repaint, as in use the walls and closet doors as a canvas. As it happens, I really hate the textured walls in his room, and someday I'll happily sand them smooth, so I told him to go at it... and he has... including painting his ceiling fan with 4 different abstract landscapes. Probably one of the most creative ways I've seen to make the most of limited space to work in. The murals he's done on his closet doors and the back side of the main door in the room are really neat, but incomplete at the moment. He's doing a jungle motif in the room, and has outfitted one wall entirely in a VERY real-looking ivy.
I'm not the most easygoing parent, likely, but my kid doesn't get in any trouble, is super-helpful at home, a pretty good shot and an A student. The fact that he's got a giant mop of hair approaching 'fro status and his room looks like an acid trip doesn't bother me in the least. Since he asked me NOT to put up much online, I just posted the fan, because it's pretty neat. 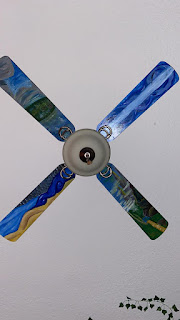 Well, we're into the February tour now at work, everyone's least favorite time to work on the water in the north Atlantic. My first watch has been less pleasant than many, but I'm content enough to be settled in and getting back to my routine for the next month.
Posted by Paul, Dammit! at 11:57 PM