back to the bunker mines

I'm back at work already, and although time passes by much too fast when I'm home, I just got a whole shit-ton of stuff done while I was there. Along the way we celebrated Inappropriately Hot Foreign Wife's birthday a few days early, as it's actually tomorrow, and, well, here I am at work and not with her where I should be. So we went out to a Palm Beach gem of a hotel bar, a place called the Leopard Lounge , which, turns out, is a restaurant/nightclub  for exceptionally wealthy people... of a certain age. At early-stage middle age, we were by far the youngest couple there, until some WASPy couple came in and stared at their phones and ignored each other, anyhow, but they didn't stay.

We stayed. Diner was exceptional- Chilean sea bass for my wife, a shrimp stroganoff for me, along with a couple of drinks. The crowd ranged from 55 to 80 for the most part, and very wealthy and very white, which made Inappropriately Hot Foreign Wife stand out like a fly in a bowl of milk. But, turns out everyone was super nice. And, amazingly, enough, they were mostly there to dance.  Seriously, at that age, folks were out there, and the live band playing 70's numbers (it was a 70's night) was fantastic. And some of those folks were really moving well, for slow numbers and fast.

Now, I have to be pretty well shitfaced to get out there and dance. Well, I used to. Turns out, in a welcoming atmosphere, I only had to be half in the wrapper to be comfortable enough to dance. But bearing in mind that Inappropriately Hot Foreign Wife is from Brazil, the woman can dance. Following her was hard at times. Doing some real samba dancing made us look good, and I didn't even fuck it up or anything.

Plus, um... my wife looked good, and anyone dancing flawlessly in stiletto heels is going to be worth watching. For me the highlight was seeing a couple, 80'ish years old, who danced every single slow song all night, and just radiated having been being happily married for ages. A departing group even said 'good night you kids' to us, which is funny in that we're knocking on middle-age at this point. 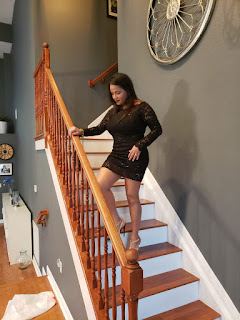 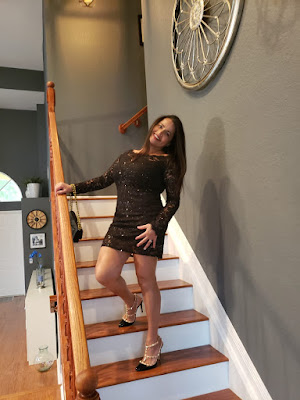 After the band said goodnight, we decided to head over to HMF, the club at the Breakers hotel, also in Palm Beach, for a glass of champagne before heading home. This is one of our favorite spots, as we always see celebrities or sports figures there, and it's a gorgeous, elegant place, but again, also hideously expensive, so we maybe go twice a year.
Anyhow, end result was a memorable and fun night, I pulled another memorable birthday off, and just a few days later, I am back on the HQ to let my liver and checking account have a little rest.

Great photo of you two! Sounds like made the day special.