From commenter Jon Spencer, who in a just world should receive many blessings for sharing:

Inappropriately Hot Foreign Wife does watch some Brazilian TV at night when I'm home. Not much, to be honest. We usually spend the evening on the patio if the weather's good, although this past spring with all the rain, we discovered the TV show 'Flip or Flop' which we both took to for some reason. With my schedule, time together is at a premium, so we don't watch TV too much. We tend to shut the rest of the world out.

That being said, Brazilian TV is still something else to see, when she does watch TV and I'm otherwise occupied. My wife will call me over to look at the ladies.

Brazil's most popular show is probably Faustao,  named after a sort of a male-version of Oprah mixed with America's Got Talent. The titular host introduces a variety of topics focused on people. He also has beautiful professional dancers who stand in the background and dance a number or two every show, and for the audience during commercials. And, wow. Look. 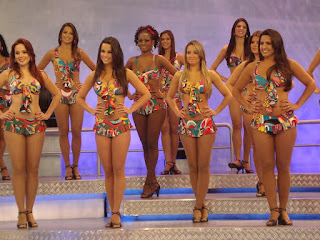 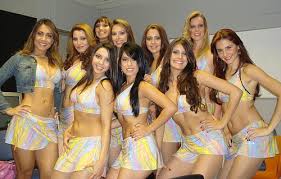 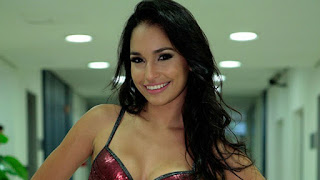 As I mentioned to my wife during a particularly forgettable interview with some Brazilian musician "I have not idea what they're saying, but I gotta say, I really like this show."

After Faustao  comes a bevy of other shows, and soap operas, although the comedy shows often enough transcend the language barrier. Think Benny Hill at his best, but without the British reserve, and with a lot of beautiful women who often end up getting wet for some reason.

One of the most popular shows last year was one where professional dancers and celebrities try to hold on to a stuffed duck while going down a Slip N' Slide set up on a very steep hillside with a ski-jump at the end. While wearing bikinis, of course. And the judging is Olympic-style, but the judges are in workboots, and often drinking.
Riveting stuff. 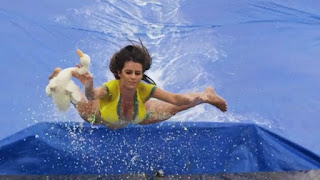 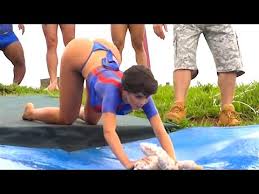 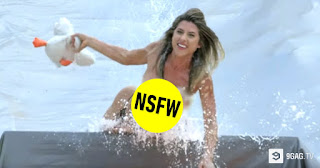 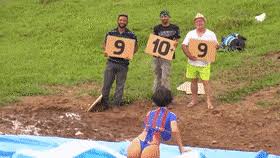 Of course, for the ladies, while it's not as blantant, the ever-popular novellas always feature male models in situations where their clothes get torn or are somehow absent. Equality.