If Assholes could fly... wait, they can!

We all know this joke: 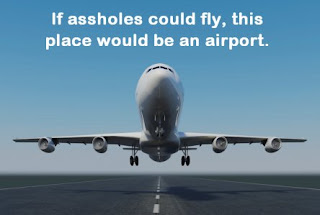 I generally fly American Airlines between home and work. I used to really like US Airways, but they got all bought up and became American, which, right out of the gate, pushed fares right up. Come high tourist season, they just get ridiculous, and, even though I'm a frequent flyer and get little gimme's like early boarding and shit, I bought a roundtrip ticket on Jetblue for next month when I go home, for less than the one-way price that American had online.


I had an issue with Jetblue once, and it really pissed me off. I spent half of my flight on my hands and knees when a fellow passenger collapsed, and I had to organize the medical response, which amazingly, had a happy ending, but for which the stewardess tried to detain me after the flight to fill out paperwork while I was trying to catch a ship, and, far worse, wouldn't give me a damn drink after I sweated through my now-grimy travel clothes.
I'm quick to forgive, normally, but not quick to forget. I remember who fails to offer me a damn can of diet soda after helping them out. They name streets after people like that:

I'm already overweight. I don't like looking slovenly in public, and I blamed Jetblue, though I don't recall being mad enough to suggest that anyone eat a dick over it. Maybe I did, though. Can't remember. Can't escape the impact of Tempus fugit I guess.
Anyhow, I remember Jetblue having better legroom than American. With my stubby legs, I still feel like my knees are up around my ears on American.
So, we'll have to see what happens. Generally, I like things organized, which is why I try to stick to just one airline, but hell, I just can't justify spending a couple hundred bucks out of brand loyalty.

The joke is you working for a marine company that doesn't pay for travel. Amazing how stupid people are.

The word to remember is 'working.' Unlike tens of thousands of folks who no longer have to worry about who is paying for their ticket to Fourchon.

We used to fly up north on Air Canada... those turbo prop jobs where tiny seats and no leg room. I remember once going to my seat and finding a huge guy in the seat beside me that was taking up both seats. He had the arm rest up and filled his seat and 2/3 of mine. I had a few words for them and they tried to bump me to the next days flight. I got the jump seat in the end.